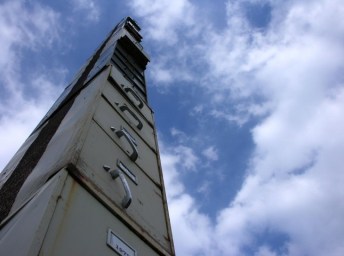 ﻿﻿N﻿ine companies showed their stuff at SSE Labs‘ demo day in Palo Alto, Calif., today. SSE Labs is a startup accelerator that is actually now named StartX. The accelerator provides student entrepreneurs with housing, office space, cash stipends, workshops and mentorship — much like storied incubator Y Combinator, except the advisors don’t take an equity stake in any of the companies.

This was StartX’s second demo day. Students and companies spend months preparing to present at the event. It’s a chance for them to get face time with some of Silicon Valley’s most well-known venture capital firms and angel investors — and a chance to pick up some funding for their companies.

“This is going to be one of the top three accelerators in the world,” said Charles River Ventures investor George Zachary, who was an investor in Twitter. “The most exciting things in the Bay Area are YC, StartX, AngelList and 500 startups — the list drops off after that.”

The program has received more than 1,000 applications and has accepted 24 total. Around one in every five people who have participated in StartX have been women. Two recipients of the Thiel Fellowship, a $100,000 award that encourages college students to drop out and start companies, have also participated in StartX.

The team of each company doesn’t have to be composed entirely of students, but the founders that are students have to hold a majority equity stake in the company. So it is geared more toward student entrepreneurs and gives them a chance to try building their own company from scratch with some help.

Here’s a list of the companies that presented today and a brief description of what they do:

6dot Innovations: This company has created a portable braille embosser that can quickly create braille labels. The device has a few buttons that let blind individuals type out messages, mathematics, music and other types of information in braille on a line of tape. The company plans to make money off labeling tape and third-party software add-ons. 6dot Innovations expects to launch the main product in the fourth quarter this year.

Clear Ear: This company is trying to solve “the earwax” problem. The company is creating a device that automatically cleans out an ear canal. It’s designed to be safer and quicker than typical earwax cleaning procedures, which can lead to complications. There are three products that project light into the ear to make it easier to see where the earwax is in a person’s ear.

GameClosure: GameClosure is an application that lets developers quickly build online social games like Zynga’s FarmVille. It is basically an HTML 5 game development kit. The games work across both mobile devices and web browsers on regular computers. The company has already built one game — called Pop Star Defense — that works across most devices.

Juntos Finanzas: Juntos Finanzas is a text-messaging based system that tracks spending practices. Whenever a user leaves the supermarket, they can text a number with how much money they spent. At the end of the month, the user receives an email message or a physical letter that includes a story of how much money was spent over the month and what kind of spending habits the user has. It’s like online financial advisory app Mint.com, but for low-tech users who don’t have ready access to the web and smartphones.

Kitchit: Kitchit gives consumers direct access to chefs and tools to help them plan private events. It also gives chefs a way to find cooking gigs so they can focus on cooking rather than the logistical details of running a restaurant. You can think of Kitchit as a social catering network — for graduation parties, weddings and other events.

Leglytics: Leglytics is a legal document search engine designed for lawyers and legal researchers. It’s designed to be a simple search engine — like Google search – for legal documents instead of more complicated search engines like LexisNexis. The search results are visualized with an array of dots, with larger dots representing more important documents or legal cases. The company doesn’t actually host its own data — it’s basically an application programming interface (API) that ties in with other sites that carry all the data.

Qwhispr: Qwhispr is an application that aggregates data from social media sites like LinkedIn and Facebook. The app filters the information it gets from the social media sites — such as unimportant content like a happy birthday note. The app extracts important keywords and returns them to the person executing the search.

PredictiveEdge: PredictiveEdge has an app to help retailers determine an optimal price point for products. It determines price based on the price for other products that are somewhat similar or carry similar characteristics. The actual product will be a web application that’s sold as a subscription.

WiFiSLAM: WiFiSLAM is working on an indoor global positioning system that uses WiFi hotspots to figure out where an individual is within a building. Current GPS technology doesn’t typically work in buildings and can’t pinpoint an exact position. A phone scans for WiFi hotspots and checks the signal strength of all nearby routers. The application then determines a person’s position based on the signal strength of nearby WiFi routers. The app should be compatible with current smartphones. It uses as much battery power as a typical WiFi connection.