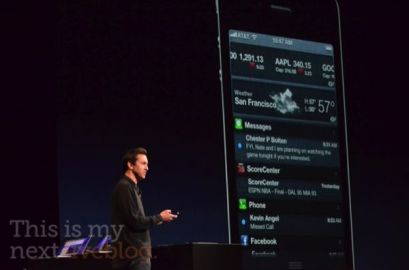 Apple today finally unveiled the details of the next version of its mobile operating system, iOS 5, at its Worldwide Developers Conference keynote this morning. Confirming many previously rumored features, Apple showed off a revamped notification interface, Twitter integration, an improved messaging app, as well as a slew of other features.

First up, Apple announced Notification Center, a complete overhaul of the beleaguered iOS notification system. The new feature will allow you to swipe down from the iOS status bar to see a compilation of notifications. Notifications will also be available on the iOS lock screen — which marks this as the first time Apple has offered anything beyond wallpapers for the lock screen. Thankfully, Apple has also made notifications less intrusive by having them appear at the top of the screen.

A new iOS notification interface has been predicted for some time, but it’s still surprising that Apple has implemented one so similar to Android, not to mention its similarity to jailbreak apps like MobileNotifier.

The new OS will also include Newsstand, a new feature in the App Store that will serve as a one-stop-shop for newspaper and magazine subscriptions. Publications will be displayed in an interface resembling the iBooks bookshelf, and they will also support background downloads. The latter feature is particularly useful since it means that you’ll have fresh content waiting for you on your iPhone or iPad without any work on your part.

Speaking of Safari, iOS 5 will also bring a few improvements to Apple’s mobile web browser. A new “Reader” button will convert mobile web pages into a more readable format for the iPhone and iPad’s screens (it’s the mobile version of Safari 5’s Reader feature on Macs). You’ll also be able to save articles to read later by adding them to Safari’s Reading List — a feature that will compete directly with services like Instapaper (and is in the works for Safari on desktops). Additionally, Safari will finally be getting true tabbed browsing support.

Apple is also introducing a new to-do list app in iOS 5 dubbed Reminders. You’ll be able to take notes in the app and schedule it to remind you at a specific time. Even cooler, you’ll be able to configure the app to ping you when you reach a specific location.

iOS 5 will also deliver some much-needed improvements to the Mail application, including rich-text editing, flags and full-text search. The iPad version of the Mail app will include a split keyboard, which lets you type messages with your thumbs while holding your iPad in portrait mode. There’s also a built-in dictionary that will be particularly useful for the Mail and word processing apps, but will be available everywhere else in the operating system.

The new OS makes iPhones and iPads completely computer independent. You’ll be able to activate new devices without plugging them into a computer and syncing over iTunes. Additionally, iOS software updates will come down over-the-air and without the need for a computer. The new updates will also be incremental, so they’ll be much smaller than the hefty updates we’re used to through iTunes.

Finally, Apple announced a surprisingly in-depth new real-time messaging system dubbed iMessage, which is its answer to RIM’s popular BlackBerry Messenger Service. You’ll be able to send text, pictures, contacts, and video over 3G and Wi-Fi connections. It looks like iMessage could seriously disrupt the world of text and multimedia messaging, and it will likely be a huge problem for existing real-time messaging services like Kik (my current favorite).

Apple said that iOS 5 will include over 200 new features for consumers and will add over 1,500 APIs for developers, which will ultimately allow them to create more feature-rich and powerful apps. Developers will have access to an early version of iOS 5 today, but consumers will unfortunately have to wait until fall to get their hands on it.

Image via This is my next’s live blog