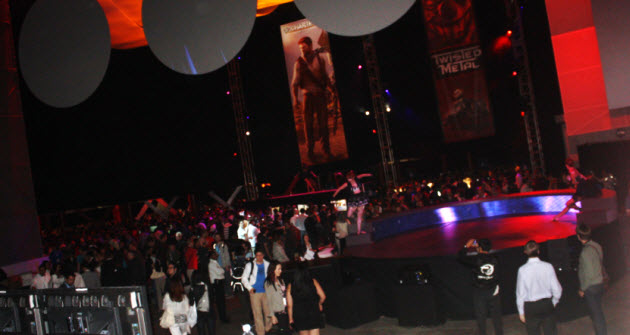 It’s been a long day at the E3 video game trade show in Los Angeles. Everyone can now start arguing about who won the battle of the press conferences. Was it Sony or Microsoft? Or Electronic Arts or Ubisoft?

I can’t say who won, because everything looked cool. One thing was clear. It was a good day for gamers. Here’s a recap of the highlights of the day.

Microsoft had some great announcements, but most of them leaked out. The highlight of the day was that Microsoft announced that it will launch Halo 4 in 2012 and will launch a remake of the classic Halo Combat Evolved game from 2001 later this year. The Halo 4 game picks up where Halo 3 left off and includes Master Chief and Cortana. It will be part of a new trilogy. Microsoft also leaked a Disney Adventures Kinect game and Star Wars Kinect the night before. With so many leaks, it was hard to say we learned anything new at the Microsoft event.

Epic Games also showed a good demo of Gears of War 3. But the company was pretty light on exclusives for the Xbox 360. Many of the titles it showed, from Call of Duty Modern Warfare 3 to UFC Undisputed, will be on other platforms. Microsoft devoted a lot of time to Mass Effect 3, Ghost Recon Future Soldier, Minecraft, and Tomb Raider as well. Those titles will be available on the PS and PC as well. So while they looked good, they don’t help Microsoft’s cause of exclusivity.

The company has sold more than 10 million Kinect motion-sensing systems, mainly on the strength of casual games such as Dance Central. But today, the company trotted out hardcore Kinect games. For instance, Mass Effect 3 uses Kinect voice commands so you can dispatch your companion characters to attack enemies. The Star Wars Kinect game also looked like it worked pretty well. And Kinect Fun Labs looked pretty funny.

Curiously, Microsoft didn’t even mention at its event that it has launched cloud storage for gamers on Xbox Live so that players can store their saved games. Maybe it didn’t say anything about it since Sony made that announcement on the PSN first.

Microsoft also took its cause of taking over the living room further with the announcement of new Xbox Live features, such as YouTube on Xbox Live and Bing voice search.

Microsoft has clearly been investing a lot of money in its core hardcore games — Halo and Gears of War — and its Kinect titles. But it didn’t seem like it had a broad line-up of exclusives.

EA showed off nine major games that were very impressive. The highlight was Battlefield 3, the first-person combat shooter that will do battle with Modern Warfare 3. The game looks like it will have better vehicles (tanks!) than MW 3, and it will have a gamer’s social network that will be available free of charge. (Activision Blizzard plans to charge for its Call of Duty Elite social network). To me, this was the best demo of the day.

Mass Effect 3 got a lot of air time at Microsoft’s press conference and at EA’s event as well. The game looks beautiful and it’s full of action and role-playing elements. The game looks solid, but it’s pretty far off, since it won’t come out until March 6, 2012.

Star Wars: The Old Republic had an awesome trailer, but EA didn’t show off much game play. The trailer suggest that this massively multiplayer online game will have a great story. The game will rise or fall on the quality of that story. The game play and the graphics are average. But it isn’t easy to tell if the story will be awesome.

Need for Speed: The Run is the latest version of EA’s classic racing game franchise. To make it more engaging, EA showed off a chase scene where a criminal suspect beats up a couple of cops, steals their car, and then drives like crazy across a city. It was over-the-top, and the parkour chase scene on foot reminded me of Mirror’s Edge.

SSX is going to get another shot at greatness as EA publishes the attitude-heavy snowboarding game in January, 2012. The game lets snowboarders live out their fantasy of boarding through the world’s most dangerous places, such as the Himalayas. It was funny when EA turned on fog machines in the audience to add to the effect of the blaring music and heady visuals on the big screen.

EA managed to pry Insomniac Games loose from Sony and will publish a shooting game called Overstrike from Insomniac.

EA Sports had some cool titles too and head of the division Peter Moore said a number of the games will have support for Kinect in the future. EA is doing good by gamers by tightening the core game mechanics of Madden and FIFA, making them easier and more fun to play.

John Riccitiello, chief executive of EA, took a few shots at rivals. His rivalry with Zynga — the social game maker that just stole away EA’s No. 2 executive — was evident as he announced the pending launch of a real game on Facebook, The Sims Social.

Curt Schilling showed off the first game from 38 Studios. The game, Kingdoms of Amalur: Reckoning, will be published by EA. It’s good to see that EA is still reaching out to publish games for major developers.

You can always tell which game is most important because the press conferences end with it. That was the case with Ubisoft, which waited until the close to show Assassin’s Creed Revelations, the final adventure of the character Ezio. This game is set in Constantinople. Ubisoft has been coming out with a new version every year for this franchise. And it doesn’t look tired yet. VentureBeat’s Matt Lynley thought this was the best game of the day.

The Tom Clancy franchise is back in a big way, from the free-to-play Ghost Recon Online to Ghost Recon Commander on Facebook. With Ghost Recon Future Solider, you’re really leveling up your weapon rather than your character.

Ubisoft also had a pleasant surprise with Far Cry 3, a new first-person shooting game that will rely on both outstanding graphics and good storytelling as well. The Far Cry games have beautiful tropical island graphics. You can see people a mile away with a rifle scope and blast them, so they never know what hit them.

Rayman Origins, modeled on the original title that came out 16 years ago, looked very cute and fun to play. It’s rare to see a two-dimensional platform game these days. This one had a nice sense of humor.

Ubisoft is also reviving World War II as a genre for a shooting game. While Call of Duty and Medal of Honor left that territory behind, Ubisoft is launching a new Brothers in Arms title. But the approach is a risky one. Gearbox Studios, maker of Duke Nukem Forever, has created four characters who will tam up and kill Nazis in a comic fashion. The game is half comic and half a bloody mess. We’ll see if gamers go for the mix of the history, bloody, and comic angles.

Ubisoft is investing heavily in the dance game craze with Just Dance 3, going up against MTV’s Dance Central 2 for the Kinect. And with Rocksmith, a Guitar Hero-like game where you learn to play a real guitar, Ubisoft is also investing in an original music game. If that category comes back, you can expect to see a much larger game industry.

Sony started off by apologizing to gamers about the screw-up with the PlayStation Network, which was down for nearly a month as the company deal with a hacker attack.

Then Sony made amends by showing great games. Those include Uncharted 3: Drake’s Deception, Infamous 2, and others. Uncharted 3 is going to be awesome: great graphics, story, game play, and awesome environments.

Sony gave the NGP a name, the PS Vita, and a price. It will cost $249 (the same as the Nintendo 3DS) for a Wi-Fi only version, and $299 for a Wi-Fi/3G version. I’ve noted before that the PS Vita looks really good close-up, so checking it out is a must at the show.

It also had some cool games such as Uncharted 3: Golden Abyss and LittleBigPlanet 2. I liked how the PlayStation 3 and the PS Vita work well together. For instance, you can play the Mod Nation Racers game on the PS 3 and use all 2 million user-generated race tracks on the PS Vita version. You can do the same with all of the LittleBigPlanet 2 games created on the PS 3.

CCP also announced that its Eve Online game (exclusive for the PS 3) will be linked to a new title, Dust, which will share the same game universe as Eve Online. You can play the Eve Online strategy game or pop into Dust for first-person combat.

We’ll see what Nintendo has in store for tomorrow. With the Wii 2, the Japanese company has a chance to wow the audience.

Who do you think had the best day? Please take our poll and explain your vote in the comments.