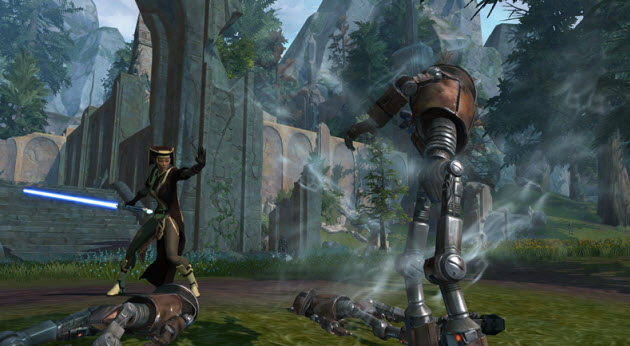 After playing hands-on with the much-anticipated Star Wars: The Old Republic, I’m reminded that some gamers love massively multiplayer games and some don’t. So it’s pretty hard for me to predict whether this game will be a smash hit or not when Electronic Arts publishes it sometime later this year on the PC. I think that if you live and breathe Star Wars, this game is for you. But if you’re not a fan or are a casual fan of George Lucas’s sci-fi series, then you’re not likely to make a big time investment in playing this game. If the stock market investors among you want a clearer answer than that, I’m sorry but I just can’t tell at this point. 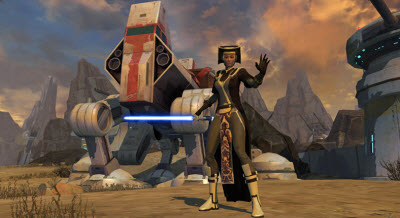 Years in the making at EA’s BioWare division, the Old Republic is a huge game with Jabba the Hut-sized costs. EA has pinned its hopes for a turnaround on fewer, bigger, and better games. And this one represents the biggest of the bets. If it succeeds, it could become the first MMO to amass an audience that rivals Activision Blizzard’s money-printing machine, World of Warcraft, which has ruled the MMO market pretty much since it emerged in 2004. With that in mind, the scope of EA’s gamble with the Old Republic should be clear: the game either bombs or it generates a billion dollars a year. I hope that it succeeds simply for the sake of restoring competition to the MMO industry, which keeps growing in size and yet is dominated by WoW. Working in EA’s favor is the fact that there are few franchises with as many fans as Star Wars.

The reason this game is hard to judge is that it lives or dies on the quality of its story, not the way it looks or the way it plays. The look and game play here are not that special, particularly for gamers who enjoy fast and furious action and realistic game play. But a good story would make gamers overlook those aspects of the game, and I just haven’t seen enough of this massive story yet, which spans the galaxy that George Lucas created so many years ago.

I got a good look at The Old Republic in a hands-on demo. The game has all the requisite requirements of an MMO, such as the ability to go on multi-party missions with your friends, engage in structured combat, the ability to climb through various levels with your character and the ability to customize your game experience. Many MMO fans and neophytes alike will appreciate the fact that it won’t be that hard to understand how to play. The basics include the usual pillars of entertainment for an MMO player: exploration, progression, and combat. 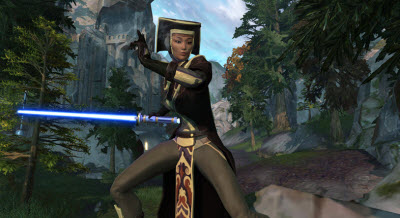 But BioWare argues that the big missing thread in most MMOs is the story. The Old Republic, it says, is very deep and the story is its strong suit. BioWare has proven its storytelling chops with deep stories such as Mass Effect and Dragon Age. Now it is applying that talent to an online game world that feels like a single-player game experience.

That’s actually a pretty good strategy, since there are a lot of BioWare fans who have been playing only single-player games for a long time. If BioWare can tempt those single-player fans to become multiplayer fans, it will grow the available market for the MMO beyond the usual size. If it does that, the company stands to make a lot more money through subscription fees.

I haven’t seen the opening of the story yet, but all I can say is that it had better be outstanding. That story is the thing that will draw the player in and help overcome some of the game’s flaws, such as the fact that it doesn’t look as good as the best single-player games do.

BioWare believes it can do a very good job of convincing you that you’re a hero at the center of the story, even though you are just one of many players. The world is populated with interesting non-player characters who hold conversations with you and steer you into the storyline. The story sets up a situation where you must make an interesting choice, and that choice leads to the action.

The cinematics, or movie-like animations that tell you a tale in between game play sessions, are beautifully done. They tell the story of the Old Republic, which exists 3,500 years before the rise of Darth Vader and 300 years after the events of BioWare’s previous single-player game, Star Wars: Knights of the Old Republic, which drew great praise for the quality of its story. The most powerful Sith empire in history has emerged to attack the Republic and its Jedi guardians. After decades of war, a temporary truce is in place. But it’s falling apart. 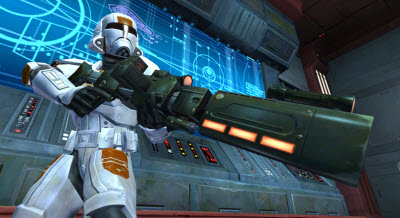 You can explore a large galaxy and visit 19 different planets (like Hoth or Tattoine) that have full sets of emotionally engaging missions with complete story arcs. The game promises a thousand hours of fun for each different class of character. There are several thousand non-player characters, each of them with their own lines to say. There are several hundred thousand lines of voice-acted dialogue in the game. Every character has his or her own voice. That makes the game seem more real. You can meet a non-player character early in the game and counsel them to move to the good side. Later, you can find out that the character has shifted from an evil life to a good one. That character will thank you for turning his life around. It’s a small moment, but one of many in the game.

I saw one scene on the planet Alderaan where your mission is to defeat a boss character, King Olgo, who was protected by a number of guardians. You have to undertake 10 different quests in a group before you can fight Olgo. With help from the rest of your party, you move from one firefight to another until you have a chance to fight and defeat the boss. The party has to take out a bunch of forcefield generators before it can take on the boss. That isn’t easy to do while being fired upon. It takes a fair amount of time to make it through each part of the quest and it’s quite satisfying to watch the boss go down. 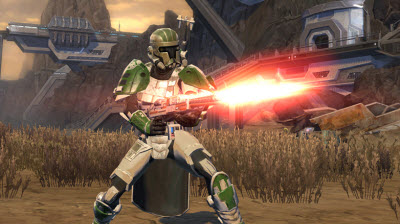 I thought the graphics were decent, though there was still a graphics tax that the game paid. By that, I mean that MMOs with online play always have some kind of delay in the game play, as the game awaits the transmission of movement commands that have to be synchronized with the central game computer. So that means that the graphics suffer somewhat as you wait for the images to load. The movement isn’t as crisp as it can be in a single-player game. Hopefully, by the launch, this problem won’t be so noticeable. We can predict that players will either quit or play based on how good the movement becomes. Movement holds the key to whether you believe this world is real or if you think it’s just a game that moves too slowly.

The game has a decent user interface, where you can look at your different options for fighting at a glance and then click on an attack. Once you do so, you can see the power regenerate until you can execute that attack again. The difficulty of each mission is adjusted based on the experience level of the players and the number of people in the party. That allows both casual and hardcore players to enjoy the same missions.

In the game, you can choose a role as a trooper, smuggler, Jedi Knight, or Jedi consular. On the Sith side, you can be a bounty hunter, Sith warrior, imperial agent, or Sith inquisitor. In our trial session, I played the role of a Jedi consular, who has the power to channel the power of the Force in combat and play the role of a wise diplomat. The character can cut to the truth in a conversation and figure out how to respond to someone who is lying.

We were assigned to undertake a four-player flashpoint. That mission takes you into a storytelling mode. The developers try to immerse you in subplot that will hold your attention for the duration of the mission. These are like “raids” in World of Warcraft and are called “operations” in the Old Republic. 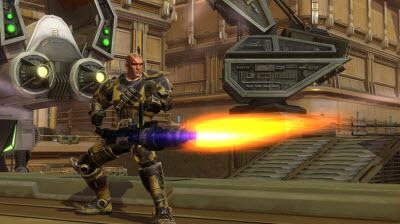 We started the mission, called the Eternity Vault, by talking to a non-player leader. In the conversation system, the non-player character says something and then the live humans respond by selecting a canned response. The game calculates who said the most relevant thing in a timely way and has that character speak the lines for the proper response. Once we got our assignment, we found we had to fight our way through a number of Imperial guards as well as some deadly creatures on the planet.

The key to surviving this mission was to stick to your role and help your squad mates. The trooper is like the tank of the group and had to lead the way into the battle. Our trooper engaged the enemy at close range and fired until the enemies dropped. Those behind the trooper had to pay attention to the trooper’s health and heal the trooper as he took some hits. 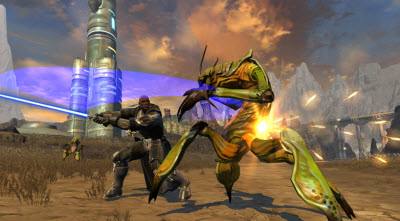 As the consular, I had special powers of using the Force. I stood in the back and used my Jedi tricks. I could conjure rocks out of the ground and toss them at the enemies. When the rocks hit the enemies, they didn’t take them down. Rather, they bounced off and I could see the damage they did to the enemy’s health bar. When the health bar, hit zero, the enemy collapsed. That’s not really all that satisfying in terms of graphics. But it’s a typical trade-off for an MMO.

But other parts of the graphics were well done. I could conjure a spell that shook the ground in a radius around me, knocking every enemy off their feet. I could also heal my friends as they fought, so it always paid to stick close to my party. We made it through a number of battles and it started to seem repetitive. Then we made it into the enemy’s base and ran into stiff opposition. One by one, the enemy picked us off as we ran around the base in the open. We had no idea we would run into such stiff opposition, and we were decimated. When you go through a long battle like that, all you want to do is fight it again until you win.

If I had to summarize the experience, I think that the Old Republic has a decent chance to succeed. But it better launch soon or those graphics are going to look quaint compared to rival MMOs that are also launching soon.