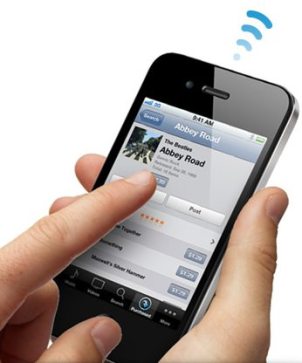 Apple CEO Steve Jobs shed some light on the fabled “iTunes in the cloud” rumors today, but it wasn’t quite what everyone expected.

Jobs announced iTunes Match, a $24.99 per year service that will match music you’ve ripped from CDs with iTunes’ library of 18 million songs, ultimately giving you the ability to listen to your music anywhere via iCloud on iOS devices or PCs.

Jobs made sure to point out that iTunes Match will sync up your library with iCloud much faster than Google Music or Amazon’s Cloud Player, both of which require you to actually upload files to their servers. Jobs said that iTunes Match could synchronize huge music libraries in minutes, since all it’s doing is checking metadata in music files with songs in iTunes’ library.

Songs that are properly matched with the service will be stored as high-quality 256Kbps AAC audio files on Apple’s servers. But those that aren’t matched will have to be uploaded just like Google and Amazon’s offerings.

Jobs didn’t mention any licensing deals that are allowing it to legally offer iTunes Match as a service, but it’s likely what the company has been pursuing for months with its record label talks. We reported last week that Apple may have spent between $100 million and $150 million licensing music from the four major labels. Both Amazon and Google launched their services without working out licensing deals, which is likely why they don’t yet have any similarly convenient library matching services.

Apple has also snagged a decent price for iTunes Match. Google Music is currently free while it’s in beta, but that could change in a few months. Amazon charges $20 a year for 20 gigabytes of storage on its Cloud Drive (although you can receive 20GB of storage free by purchasing an MP3 album from Amazon). Since Apple is giving users access to music it already has on its servers, it can also effectively offer consumers an unlimited amount of streaming music via iCloud. (Though we don’t know if uploaded music will factor into a user’s 5GB of free iCloud storage.)