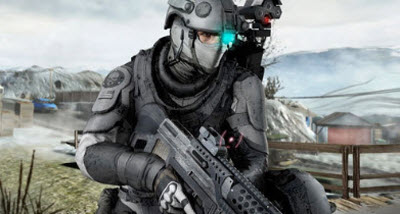 Ghost Recon, part of the legendary Tom Clancy modern warrior franchise at Ubisoft, is about to push into the next generation.

Ubisoft is unveiling Tom Clancy’s Ghost Recon Future Soldier today at the E3 video game show in Los Angeles and we’ve already had a first look. The game, which debuts in 2012, is going to be one of the French game publisher’s major contenders for blockbuster status. If it succeeds, hundreds of millions of dollars will flow into Ubisoft’s coffers. 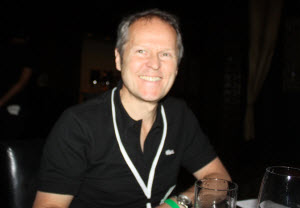 The game has been in the works for a few years. It uses a new graphics engine with better-looking imagery and it is another example of how Ubisoft is focusing on beefing up its game quality, said Yves Guillemot, chief executive of Ubisoft, speaking at a dinner on Sunday night. Guillemot also said the game will be like other future Ubisoft games in another respect; it will have as yet-unannounced social features that will get players to play with their friends and become more engaged with the product.

This modern combat game series has a reputation as a thinking person’s shooting game. The whole concept has been that a squad of properly equipped soldiers with intelligence and technology can beat a force of a much larger size. With Future Soldier — the fourth game in the series — the franchise is pushing further into the future than past games, which means gamers get access to cooler technology.

While other games reward players for speed and kills, Future Soldier will reward cunning soldiers who work together in teams. One key feature for that is the ability to suppress an enemy, something that comes from Ubisoft’s Brothers in Arms series of World War II games. With suppression, a soldier with an automatic weapon can fire at an enemy and prevent that enemy from moving. Then a squad mate can outflank and take out the enemy.

If you play close to a squad mate — a concept called proximity — you can help your squad mate out when the soldier is wounded. In multiplayer play, you can take out an enemy and then steal that enemy’s data. That lets you know where the enemy is for 60 seconds. It’s like a power play in hockey, where your side gets an advantage for a period of time.

Over time, you can upgrade your intelligence, weapons and combat skills. The team can share weapons with each other. And the squad can easily call up an overhead map that shows where all of the friendlies are.

In Future Soldier, a squad of soldiers can walk into a hostile town cold and figure out how to deal with hidden enemies in minutes. They can, for instance, launch a little aerial drone that flies ahead and checks out what lies ahead beyond a bunch of buildings.

In preparation for a firefight, the whole squad can figure out which enemies they will take out first as soon as the squad opens fire. And new kinds of enemy detection systems can temporarily reveal where enemies are hiding behind barriers.

Those are huge advantages, and it may make it seem like the Ghost soldiers have too much of an advantage. But they also have to deal with larger waves of enemies.

Ubisoft has been working on the game for a while now. It seems like it doesn’t move as fast as the Call of Duty or Battlefield 3 games. But that’s a consequence of the style of game. Ghost Recon is a third-person shooter game, though you can switch to first-person mode when you using a scope to aim your weapon.

I played a four-player cooperative mission where four soldiers entered a town and used drones to identify and take out enemy sentries. Then we all ducked below a concrete barrier and identified the soldiers that we were all going to target first in the coming firefight with the enemy’s main force. That way, we didn’t wind up targeting the same person. Once we locked on, the chaotic firefight ensued. When one Ghost is hit, another can heal the comrade on the spot. That allows the Ghosts to survive a major battle.

At the close of the battle, you rescue a hostage. But a pair of enemy helicopter attacks your force on the ground and you have to escape. The group calls in a spectacular missile assault on the enemy helicopters as they are about to overwhelm you. That shows that Ubisoft’s developers have learned a thing or two about dramatic combat scenes from rival games such as Call of Duty Black Ops. This game has a more visceral feel than past Ghost Recon games, and that’s a good thing because it will hold a gamer’s attention.