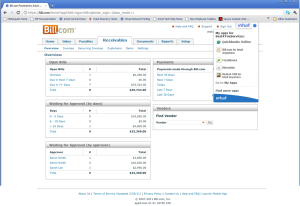 Accounting software company Intuit on Tuesday announced a set of widgets and a service for integrating its QuickBooks software into web and mobile apps.

The new service, Intuit Anywhere, lets developers connect their apps to Intuit’s Partner Platform, giving them the ability to integrate with QuickBooks data and let customers sign on using their Intuit ID. That’s similar to the way you can sign on to websites using Facebook Connect or a Twitter ID, except in this case you’ll be using an Intuit login and giving the web apps access to your QuickBooks data on Intuit’s servers.

The service is aimed at helping turn QuickBooks into a platform and an app store, an approach that has generated huge returns for Apple, Facebook, Twitter, Salesforce.com and others. Intuit also said it would make certified apps available on its Intuit App Center, a collection of Web apps that work with QuickBooks. Intuit said that 1 million users have registered for its App Center.

With just 4 million customers, QuickBooks doesn’t have anything like the gravitational pull of an Apple or a Facebook. But those customers — small businesses that use QuickBooks to run their core operations — are a prime target for developers.

Intuit Anywhere is in beta now and will be released in the fall.