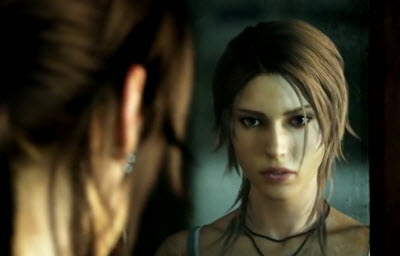 At 21, Lara Croft is far more appealing as a heroine than in her older years of over-confidence and swagger. The gun-toting adventurer of Tomb Raider in her younger (pre Angelina Jolie) days was innocent, vulnerable, emotionally unarmed — and still tenacious about surviving the worst.

That’s what the developers at Crystal Dynamics have discovered about the character that has been at the heart of a valuable video game franchise since 1996. More than 35 million Tomb Raider games have been sold, generating perhaps well above $1 billion. Properly rebooted, the Tomb Raider franchise could be extremely lucrative for Crystal Dynamics and its publisher, Square Enix (which now owns the game publisher Eidos). The tale of the reinvention of Lara Croft is a good example of taking risks in order to survive, rather than sitting still only to face a long decline.

During the last 15 years, Tomb Raider has seen a total of 10 games published and two movies starring Angelina Jolie. Core Design made the first six games and Crystal Dynamics made the last four. There have been plenty of chances to reinvigorate Tomb Raider, but not all of them have been successes.

“She was very much ready for a re-imagining,” said Karl Stewart, global brand director for Crystal Dynamics. “We want to show how she becomes that force hero. We all know her to be a hero, but we want to show her in a different light.”

Darrell Gallagher, general manager of Crystal Dynamics, said the game takes place when Lara is 21 and looking for adventure. She is just out of college and is aboard the ship Endurance off the coast of Japan. Little does she know that, as a storm strikes, she’s about to need a lot of endurance and discover what she can do.

Her ship goes down and she has to claw her way back from nearly drowning. She wakes up in a cave, hanging upside down and tied up in mummy fashion. She has to escape by swinging her body back and forth. The physics of the game is what solves the puzzle at hand. She swings into a bunch of lit candles, which burn her bindings enough to allow her body weight to tear through the wrappings. She falls to the floor and is impaled on her side by a metal rod. A narrow escape. 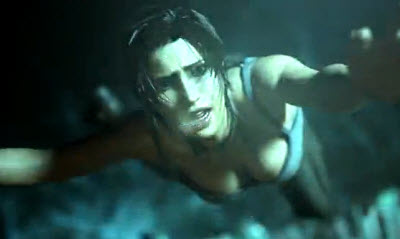 Then she looks around, sees more bodies hanging and more ritual candles lighting some kind of torture chamber. Every step of her escape is a struggle. She wades into a part of the cave where she can barely keep her nose above the surface of the water. The feeling is claustrophobic. She has to go through a waterfall, causing her torch to burn out.

Suddenly, a stranger tries to grab her. She kicks him off and escapes. 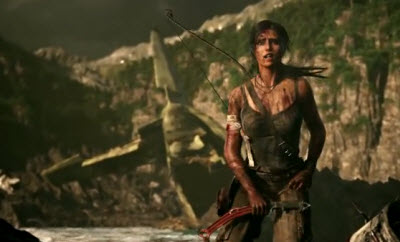 Then she enters a grotto where she must figure out how to escape. The scene is a kind of mechanical puzzle. Once you unlock it, Lara can move on. She gets through it, but feels an avalanche coming on. Once again, the stranger reaches for her and she fights him off. A giant rock falls on him and she starts running for dear life as rocks fall down all around her. As she escapes into sunlight, she sees all of the shipwrecks around her.

In another scene, Croft finds her travel companion, an old family friend. She has to help him out and has to figure out the puzzles in the wide open landscape that can help her save him. As she does so, she realizes the huge physical challenges that lie ahead. She becomes emotional, trying to say that she isn’t as adventurous as her father and has a lot of doubts about her chances.

The thing that’s attractive about this approach to Lara Croft is that she doubts herself, but finds that she has an instinct for survival that can be trusted and improved with each new challenge. She curses a lot. When she is forced to kill a wolf, she laments, “It was me or you.”

Part of the reason the remake looks so good is that the realistic animation of Lara — water on her face, tears in her eyes, dirt and dried blood on her skin — all make her seem so real.

“It’s all about the growth of a character — a story with a massive character arc,” said Gallagher. “That’s the Lara Croft for my generation.”

I found this new Lara Croft to be very likable and the game to be much more engaging because the character goes through a kind of odyssey. The game debuts in 2012. Check out our interview with Stewart of Crystal Dynamics.