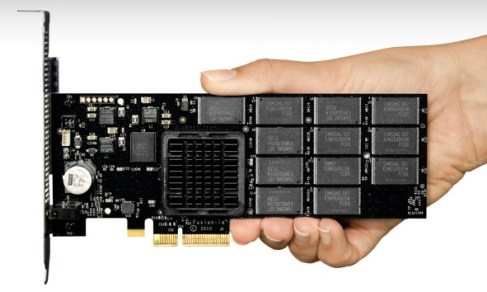 The company went public on the New York Stock Exchange, which actually uses Fusion-io’s technology itself to save on data center energy costs. The company makes flash memory modules that store data closer to where it’s needed.

Salt Lake City, Calif.-based Fusion-io (a DEMO veteran) has had great success selling its devices into financial institutions that can benefit from its five-fold increase in memory data transfer. The company’s partners, such as IBM, are carrying Fusion-io into a wider variety of data centers, thanks to the benefit that Fusion-io brings in energy efficient computing. With the better memory module designs from Fusion-io, companies can reduce power consumption, cut cooling expenses, and eliminate expensive storage solutions. At the same time, they can vastly improve performance.

Goldman Sachs and Morgan Stanley handled the IPO for Fusion-io. The price range for the shares had been set at $16 to $18 a share, and the company went public at $19 a share. David Flynn, chief executive of Fusion-io said the company will use the money to expand its leadership position in the emerging market for memory modules that move data closer to servers. He said Fusion-io’s technology was created for an era of cloud computing, replacing the mainframe computer storage technology that has been around for decades.

The company’s filing with the Securities and Exchange Commission says it pioneered a next-generation storage memory platform for decentralizing data in a data center. It relocates critical data from centralized storage (where it’s stored in banks of hard drives) to the server, where it is processed in the form of flash memory modules.

Back in March, Fusion-io shipped more than 20 petabytes of enterprise-class memory to more than 1,000 customers. That’s a lot of storage. The company’s success is driven by the exponential increase in data storage required in the age of the internet and by strict compliance regulations necessitating the storage of corporate records. Roughly $52 billion will be spent on high-performance storage and networking and memory-rich servers in 2011, according to market researcher IDC.

Fusion-io recently said that IBM will offer eight versions of input-output adapters based on Fusion-io’s ioMemory technology across a dozen different IBM servers. That’s a big expansion and a bigger endorsement by Big Blue for Fusion-io. The new adapters became available on March 1. Supermicro is also using Fusion-io in a new line of server and storage devices.

The company was founded in 2006 by Flynn and Rick White. Apple co-founder Steve Wozniak serves as its chief scientist. Rivals include LSI and other memory chip makers. Fusion-io’s customers include Zappos, MySpace, Wine.com, Answers.com, and the Lawrence Livermore National Laboratories.