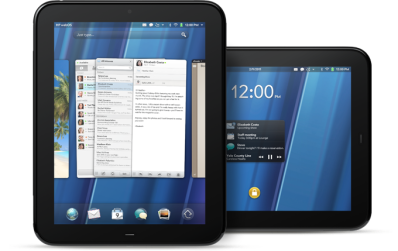 Not to be left behind in the wake of the iPad 2 and an onslaught of Android 3.0 tablets, HP announced today that its WebOS-powered TouchPad will go on sale in the US on July 1 for $499.

Originally announced in February, the TouchPad is HP’s attempt to bring Palm’s slick WebOS platform to a bigger screen. But in a world where consumers are already bombarded with a ton of tablet choices, HP will have to work extra hard to make sure the TouchPad isn’t dismissed as “yet another tablet.”

WebOS does have its benefits — specifically when it comes to multitasking, or running multiple applications at once. As I’ve written previously, the TouchPad’s multitasking capabilities put the iPad 2 to shame (although the same has been true of WebOS versus the iPhone OS for some time). Ironically, RIM has already released its PlayBook tablet, which blatantly copies WebOS’s multitasking implementation.

The 9.7-inch TouchPad features a dual-core 1.2 gigahertz Snapdragon processor and a front-facing camera for video conferencing. The $499 model comes equipped with 16 gigabytes of storage, while the $599 model packs in 32GB.

HP says the TouchPad will hit the UK, Ireland, France and Germany a few days after its American launch. Canada will get the tablet in the middle of July, and it will land in Australia, Hong Kong and other international markets later this year.