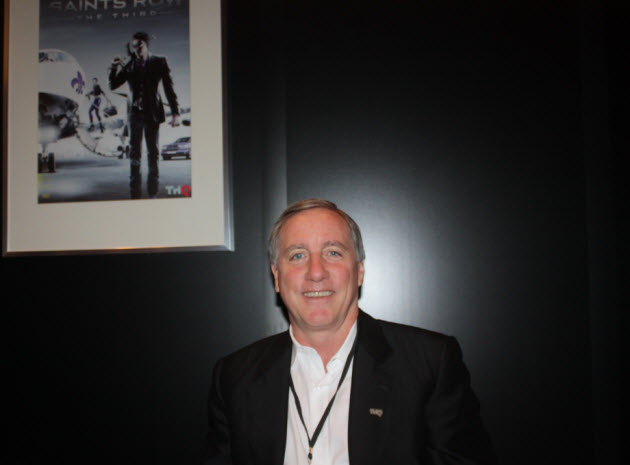 Brian Farrell is the longtime chief executive of THQ, the publicly traded video game publisher based in Calabasas, Calif. THQ is in the midst of a turnaround effort as it focuses on better, higher-quality games like many other large rivals in the video game business. THQ is making big bets on titles such as Saints Row the Third, Metro Last Light, Margaritaville, Space Marine, and others. (My preview coverage of Space Marine raised quite a stir, but Farrell was quite diplomatic about that.) Farrell a good-humored executive who is doubling down on big titles and is expanding into new digital games. We met up with him for an interview at the E3 trade show in Los Angeles last week, where the company showed off a bunch of major titles.

VentureBeat: What’s your, say message for the show?

VB: I saw it at the pre-E3 judge’s meeting. It’s quite amusing. 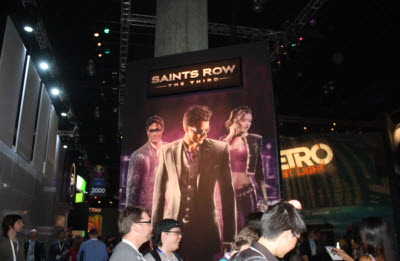 BF: It’s just fun. You know what? I am really proud to be bringing a game to the market that’s not bashful about what it is. It’s just fun.

VB: Yeah that looks like one of those game franchises that could grow its audience over time. Sort of like Mass Effect 3, which could be bigger than Mass Effect or Mass Effect 2. The third could be the biggest game for EA yet. Is that what you are trying to do and have you considered how to do that?

BF: Well, the way we think about the first one is that it was on the Xbox 360 only. We did something between 2 million and 3 million units. In the last one, it appeared on both the PlayStation 3 and the Xbox 360. To date, it has sold more than 3.8 million units, and it’s still selling.

People like that brand and it is almost three years old. We know there is rental, we know there is pass along, we know there is second-hand sales, so there are millions of people who have played Saints Row, and they had a boatload of fun. It’s the game that gamers ask us most about. We released the trailer and had top five Game Stats for a few days. That told me there is an audience for the game. We didn’t even promote it. The positioning now is that the Saints (the gang in the first two games) have made it and they have private jets and clubs, and I think it is interesting where the franchise is going.

VB: Does it also seem to escape the comparisons to Grand Theft Auto now?

BF: Yeah, people who are in the business really know now that they share the same trunk but GTA has gone off this way and it’s a great game experience. But Saints Row is really over the top, just crazy, silly fun. You can go anyway, do anything, and play in this sand box. That resonates with players.

VB: When you get to this age, how do you double down on it? You know it’s popular. What do you actually do?

BF: It starts with the game. Volition, the game developer, has been working on it three years. Saints Row 2 shipped in 2008. We didn’t just ask them to do a sequel in one year or two. There is new technology. There is a lot more going on in the screen at any given time. If you call in an air strike, there are vehicles flying everywhere. It has great indoor environments …. 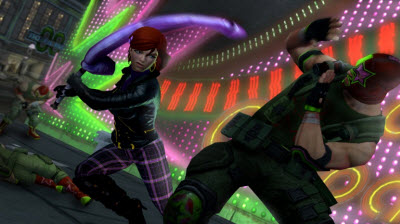 BF: (Laughs). It makes you laugh though, right? I can’t say that with a straight face.

BF: I was just surprised when it was on Game Trailers TV on Spike TV the other day. They actually showed that on the trailer. It seems to resonate with players but there is no truth in the rumor that it is going to be a gift that you can purchase.

VB: Okay, so what did you think of some of the industry things such as the Wii U?

BF: I take my lead from the creative guys. They liked what they could do with the Wii U. When creative/publishing chief Danny Bilson and the team first saw it, they liked it. We have Darksiders 2 in development at Vigil. It’s an action role-playing game. We have player characters in it and there is a lot of loot collection. Part of the thing is dropping loot for your friends or picking up loot that your friends have dropped. We can now take all of those systems off the big screen and put them on the little tablet screen. That keeps the big screen for the 3D open world. All of the management is on the small screen. The creative guys like it. We don’t need all new engines to power the software. From the business standpoint, that’s much better. We keep the same user interface and game play across platforms. It makes business sense. The creative guys have ideas for it. So we like it.

VB: You invested heavily in creative teams for THQ’s turnaround. Now you’re starting to harvest that with the launch of games like Homefront and Red Faction Armageddon. Do you see this as a harvesting time?

BF: Yep. Now on the pipeline if you look, I think we are one of the few publishers here showing stuff in the booth for next year. We’ve got code for it. I mean live code. We have live code on Metro Last Light and live code on Darksiders 2. It shows our commitment to try to make really really good games.

VB: There’s a digital online revolution going on. How are you adapting to this environment?

BF: We laid out for the investors yesterday our four-prong digital strategy. The biggest prong as you probably know is to turn digital ecosystem on for the console launches. For example, for both Red Faction and Space Marines, we’ve got digital games on Xbox Live and PlayStation Network coming. That sets you up for the game and makes you familiar with the brand. There are certain things you are going to unlock in the major games. You can start interacting with the brand. Then there is post-launch downloadable content. There are avatars that users can download. There are season passes. That opportunity can be 20 percent to 40 percent of the retail revenue, and it’s one of the things that companies talk a lot about. The industry hasn’t talked a lot about this. But a good game should get 20 percent to 40 percent of revenue from the digital side, for pre-launch and post-launch digital content sales. 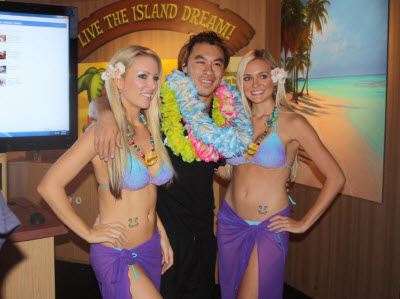 So that’s probably the biggest single opportunity for all of us now. We have a group now doing Facebook games but with a strategy of taking brands we own or control onto Facebook. So we took UFC to Facebook and it has just passed a million monthly average users, and it is on a pretty quick run.

Jimmy Buffett’s Margaritaville (models for the game are pictured) is what we are calling the next generation Facebook game. It’s got 3D graphics and Jimmy’s music. It’s going to be playable on Facebook and both iPhone and iPad. And so the strategy is going to be a massive [focus] on using our branded content. And then the big digital thing is our Warhammer 40K massively multiplayer online game.

VB: So what is the timing for all of this? How do you know when to invest more money in digital games?

BF: Well, I think you know me pretty well. You don’t go big until you figure it out and get the playbook right. You have to have the right team and the right leader to run it. Then you start ramping up. That’s where we are right now. We are starting to ramp in those areas. We can have a solid strategy with the right team in place. Then it’s a matter of bringing the games to market. 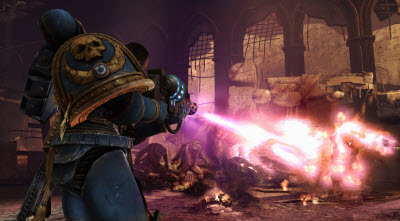 VB: I discovered you have a loyal audience for Space Marine.

BF: (Laughs). We know that intellectual property. You know the background to that, Dean, right? Those fans — they think that Warcraft and Starcraft were “ripped off” from Warhammer and Warhammer 40K. We don’t take that position, but they are avid fans. You found that out.

VB: They seem to have been waiting for this kind of game for a long time.

BF: I mean the people love that intellectual property. They’ve been playing the Relic Entertainment for years. We started with the real-time strategy game. We are now giving them an action game on a console. We’ve done six million copies of the RTS. So now we can get set up for a really well-executed action game. And then it just makes the universe of fans bigger for the MMO when you watch it next year.

VB: Well my apologies for my ineptitude.

BF: Would you like it if we hit your blog on your behalf? I would be delighted.

VB: Yes, you can make a guest appearance?

VB: I do that once every five years. Like with the Mass Effect game. Hopefully it hasn’t interrupted your plans.

VB:  But that game and its potential — what do you see? It’s like a brand new extension and companion to the MMO in some way?

BF: Yes. It is building out that universe. We can get more awareness around that universe and bring more players into it. They can start enjoying that deep, rich Warhammer universe. There is a fan base. So what we are trying to do is expand the audience. We know where the fans are, as you know. The real fans are going to buy and love the game. We would love to broaden that audience. So by the time we bring out the MMO, even more people will know the universe. They will be eager for the next big online experience.

VB: So then how is the outlook for the industry?

BF:  I think it’s good. If you ever look at the industry, it’s big. You’ve been around as long as I have, right? Well it’s changed, and you can’t just look at one part of the market and say that’s the market. So where we’ve place our investment all these years around the Xbox 360 and PS 3 and the PC — that’s 70 percent of our revenue. Those are growth market issues this year and we think it’s always going to be really strong in those markets. When you look at NPD projections, given the fact that Wii and the DS are declining and the PSP is as well, the numbers don’t look good overall. But if you’re not in those declining markets, you don’t really care that much. We don’t pay that much attention to the declining markets. And then you look at the digital markets. They are growing. They are not really tracked. So when people see the industry now, it’s a really broad question. We see growth on Xbox 360 and PS 3. We see it on the Facebook market and we see it in some of the digital ecosystems around the brands that we’ve launched. So we think those markets are going to be robust.