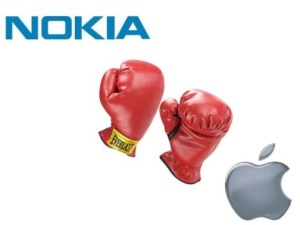 Nokia on Tuesday announced that Apple had agreed to pay a one-time settlement and continuous license fees for patents that Nokia owns, ending a legal battle that started in 2009. Both companies will also retract all prior complaints from the U.S. International Trade Commission.

“We are very pleased to have Apple join the growing number of Nokia licensees,” said Stephen Elop, president and CEO of Nokia, in a statement. “This settlement demonstrates Nokia’s industry leading patent portfolio and enables us to focus on further licensing opportunities in the mobile communications market.”

The specific terms of the agreement were not revealed, but the deal will boost Nokia’s second quarter profitability at a time when the company is hurting from company re-organization and diminishing smartphone market share. Nokia is currently working to build Windows Phone 7 phones after a long history of Symbian-based phones.

The two companies have been in litigation since October 2009, when Nokia filed a lawsuit saying that Apple had infringed on its patents and demanded royalties on all iPhones sold since the product was introduced in 2007. As recently as March, Nokia said it had 46 patents involved in legal actions with Apple.

Apple’s legal troubles with its phone rivals are not over by far. The company still has patent lawsuits pending with the likes of Samsung and HTC.

One of the more peculiar aspects of the Nokia and Apple agreement is that Apple will now be helping fund a rival manufacturer that is trying to build up the market share of a rival phone OS. Both Gartner and IDC predict that Nokia and Microsoft’s WP7 push will lead WP7 to be the No. 2 phone OS in the world by 2015, over Apple’s iOS. Apple certainly can’t be happy that this agreement could help make this a reality.