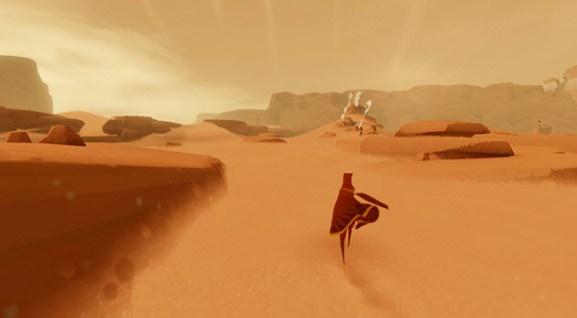 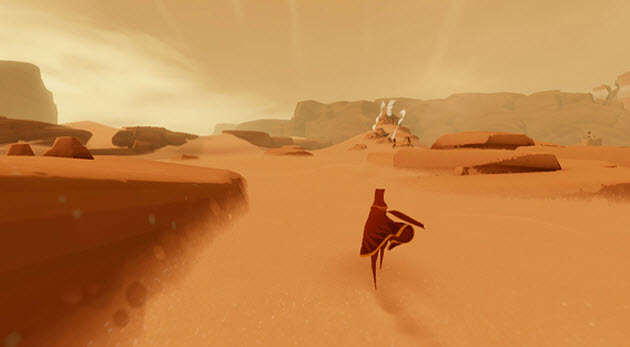 We are still showing off all of the goodies we saw at the E3 trade show last week in Los Angeles, where 45,000 attendees got their first look at the video games of the future. At the Sony booth, we caught up with Jenova Chen, co-founder of Thatgamecompany and co-creator of Journey, one of the best games at the show. Amid the noise of E3, you can hear in Chen’s own words the thinking behind the game while VentureBeat’s Matthew Lynley plays it in the background.

The nice thing about our interview with Chen was that it took place inside the Sony booth as we were surrounded by games that delivered nothing but death and destruction. It shows that non-violent, non-traditional indie games still have a place, even inside the very heart of the video game industry. Just how much of a must-see was this game? Well, right after we interviewed Chen, Nintendo of America president Reggie Fils-Aime walked under escort into the Sony booth and got a demo from Chen. 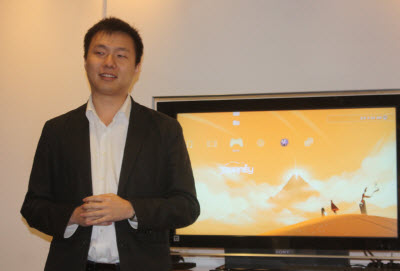 Thatgamecompany is used to making non-traditional games. In the company’s previous PlayStation Network game, Flower, Thatgamecompany managed to pull off a story with a nonviolent theme. You play the wind in the dream of a flower in the middle of a dying city. I still remember how beautiful the colors were in that game and how beautifully rendered the grass was as the wind blew through it.

With Journey, the sand gives me that same reaction. The sand is a graphics marvel. It moves and looks and behaves physically as you expect sand would. It makes a sound when you walk through it, and it brings a smile to your face. In short, walking through sand in this game is fun. But, as Chen says at the end of the video, it’s not just going to be a walk in the, er, sand.

Thatgamecompany was founded in 2006 by Chen, creative director, and Kellee Santiago, president. Both of them were graduate students at the University of Southern California’s School of Cinematic Arts, Interactive Media Program, when they started making games. Their first experiments, Cloud and Flow, were unique creations. The company gathered steam when Sony published Flow on the PlayStation Network in 2007 and then Flower in 2009. Thatgamecompany has a very small team, but each time, whenever the company debuts a new game, it manages to catch everyone’s attention.

Please check out the video below.