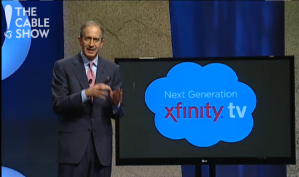 The new enhancements give Comcast a fighting chance in the battle to stop long-time customers from cutting the cord and using streaming media services and smart devices instead.

Admittedly, Comcast’s current TV service leaves much to be desired. For instance, its user interface for navigating through programming is a grid of text with very few images — not to mention it’s at least a decade old. Flipping through channels is painfully slow because of the underpowered set-top boxes. And as for the remote, it looks like something stolen from a Fisher-Price Playskool television toy.

Having said that, the enhanced TV service is a sharp contrast to what Comcast subscribers have known for years.

The old user interface has been replaced with a cleaner, more polished design similar to AT&T’s Uverse cable service. As shown in the screenshot, the top navigation bar is split up into five categories, each of which makes use of images to illustrate what’s available. 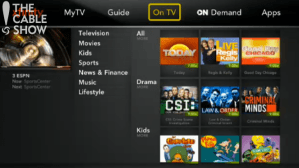 Perhaps the biggest enhancement to the  TV service is its integration with Facebook. The first category “MyTV” pulls content recommendations based on what a person and their Facebook friends are watching and liking. Selecting individual programs pulls up a list of similar shows and allows for communication on both Facebook and Twitter, according to the screen from the demo.

In a nod to streaming media services like Apple TV and Roku, Comcast’s TV service is also adding support for applications. Presumably, this is how subscribers would be able to integrate with services like Hulu, which Roberts specifically mentioned when explaining how the MyTV category generates recommendations. It will be interesting to see how deeply Comcast allows applications to integrate with the new UI.

Roberts said the goal, beyond improving the experience of watching content on a TV, is to offer the same experience on any device seamlessly by using the cloud. To do that effectively, it’ll need to upgrade its broadband network, which Comcast plans to do.

As for the hardware, Comcast previously announced it would be upgrading to Intel-based set-top boxes manufactured by Pace. However, the enhanced TV service will require a new RF remote control that features a much simpler design, according to Roberts. Rather than requiring a full keyboard, subscribers can search for content using the number buttons. Also notable, the “Last” button — common to many remote controls currently in use — has the added functionality of bringing up the a bottom navigation tray that displays the last nine programs accessed.

The entire demo video is embedded below for anyone interested in watching.