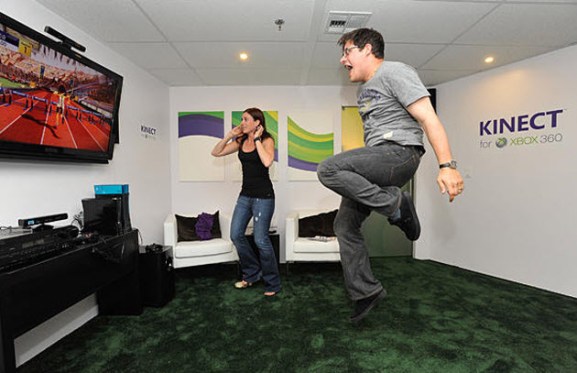 Microsoft announced today that it is releasing a beta development kit that will let software developers tap into the company’s Xbox 360 motion controller, the Kinect, and build apps that use it.

That means Microsoft is opening up the Kinect, originally designed to be used with its Xbox 360 game console, to be used for third-party applications with other devices like PCs. Microsoft announced that it would release the SDK (software development kit) for non-commercial use earlier this year at the Consumer Electronics Show in Las Vegas, Nev. The SDK is available for download now at Microsoft’s research website.

“We are very excited to announce that the Kinect for Windows SDK beta is now available for download,” said Microsoft Research’s Anoop Gupta. “This is the official non-commercial SDK for Windows and Kinect.”

Developers get access to the depth sensor, the microphone array, and just about every other piece of Kinect’s technology. Microsoft is also providing access to skeletal tracking, which means developers can create apps that have gestures like hand swiping and dancing. The development license is for non-commercial use only — meaning developers can’t make any money off their Kinect apps yet. A commercial license to develop apps for the Kinect should come out sometime later this year.

“Although it is our intent to release a commercial SDK, we aren’t making any announcements on that today,” Gupta said.

The Kinect is a camera that tracks body movements and sits right under the television. It’s connected to Microsoft’s XBox 360 and used for games and to navigate the console’s media center. While it isn’t 100 percent accurate, the device worked well enough to become one of the best-selling devices of all time. Hackers have already had their way with the Kinect, creating applications ranging from games to slick multi-touch interfaces that feel like they came out of a movie.

Microsoft has already made several moves into other spaces with the Kinect — such as moving into Cisco’s turf with a home video conferencing service. The company has said it isn’t going to leave the device as a simple video game controller. And the Kinect has helped bring Microsoft’s entertainment and devices division up to speed with the rest of its operations —  that division alone brought in about $3.7 billion in revenue.

But so far some of the most interesting applications have been underground and unofficial. Now it looks like Microsoft is taking a page out from Google’s playbook by appealing directly to the development community. Android has become popular among developers because it is a more open environment and supports almost any idea that developers want to pitch.