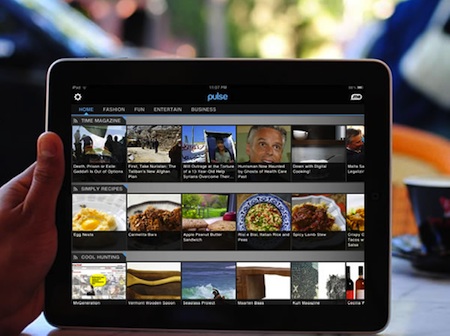 Pulse, which created the popular Pulse news reading app, has raised $9 million in its first round of institutional venture funding.

The app aggregates news stories from RSS feeds and social networks and presents them in a design that was apparently impressive enough that Apple chief executive Steve Jobs showed it off on-stage last year. It started out as an iPad application created by two graduate students for a class at Stanford Institute for Design, but Pulse is now available for iPhone and Android as well — and the company recently launched a Web service for sending stories from your computer to the app.

The Palo Alto, Calif. company’s relationship with the media industry — specifically The New York Times — got off to a rocky start when The Times objected to the app last June, and it was temporarily removed from Apple’s App Store. Now, however, Pulse says it has content deals with companies that include The Wall Street Journal Digital Network, The Huffington Post, and The New Yorker. It also says it has more than 4 million users.