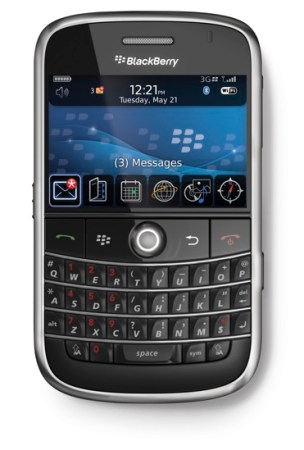 This past quarter has been cloudy for BlackBerry maker Research in Motion. While the company confirmed that it shipped 500,000 units of its next-generation PlayBook tablet, sales of actual BlackBerry phones were disappointing.

The company reported profits of $695 million in the first quarter on $4.9 billion in revenue. Its revenue was down 12 percent from $5.6 billion last quarter, but up 16 percent from last year. RIM warned investors in April that it likely wouldn’t meet initial sales and revenue expectations for the quarter.

As for BlackBerry phones, RIM says it shipped around 13.2 million devices. That may sound like a significant amount, but it’s no match for the 18.6 million iPhones Apple sold in its last quarter.

“Fiscal 2012 has gotten off to a challenging start. The slowdown we saw in the first quarter is continuing into Q2, and delays in new product introductions into the very late part of August are leading to a lower than expected outlook in the second quarter,” RIM co-CEO Jim Balsillie said in a statement released today. “RIM’s business is profitable and remains solid overall with growing market share in numerous markets around the world and a strong balance sheet with almost $3 billion in cash. We believe that with the new products scheduled for launch in the next few months and realigning our cost structure, RIM will see strong profit growth in the latter part of fiscal 2012.”

RIM’s slow BlackBerry sales aren’t entirely surprising. The company didn’t have any significant new phone hardware this past quarter; instead, all of its energy was spent on the PlayBook tablet. RIM likely expected that its phone sales would suffer this quarter, but the bigger problem for the company is that there isn’t any exciting phone hardware to look forward to either.

Last month, RIM announced the touch-screen enabled BlackBerry Bold Touch, but that phone won’t even be available until the summer. The Bold Touch will sport BlackBerry OS 7 — which was initially supposed to be an update to the current OS 6 — and not the revamped QNX-based OS everyone is waiting for.

RIM announced earlier this morning that one of its three COOs, Don Morrison, is taking a medical leave from the company. Morrison, who manages domestic and international operations, is expected to return later this year. Still, the announcement comes at a sensitive time for the company.