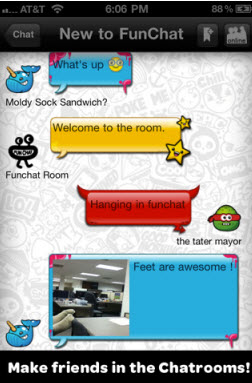 The Pleasanton, Calif.-based company has created a social app with a bunch of different features, including cross-platform chatting, gaming, and pranking. This app is another point in the trend toward gamification (making non-game apps more interesting by making them more game-like). In this case, it gamifies mobile communications.

With the app,  you can push an audio prank to a smartphone, even if the phone is in standby mode. You can use this to send out wolf whistles or angry pig noises.

FunChat is an extension of the company’s efforts that also include FunMail (which pairs your text messages with fun images), FunTones (funny ring tones), and FunMe, tools for sharing user-generated content. With FunChat’s Chattitude, you can customize your experience with avatars (virtual characters), chat bubbles and lots of virtual goods.

With the games, you can join rooms that include casual titles such as concentration, carnival duck shooting, racing and others. The HTML5 games can be played across iOS and Android devices. Developers can use the FunChat Mobile Engagement Platform to create their own HTML5 games that run across iOS or Android.

The company was founded in 1999 and the company has 50 employees. Rivals include Ngmoco, Electronic Arts and others. FunMobility has been profitable since 2004. Its founders are Adam Lavine, chief executive, and Dennis Chen, chief technology officer.