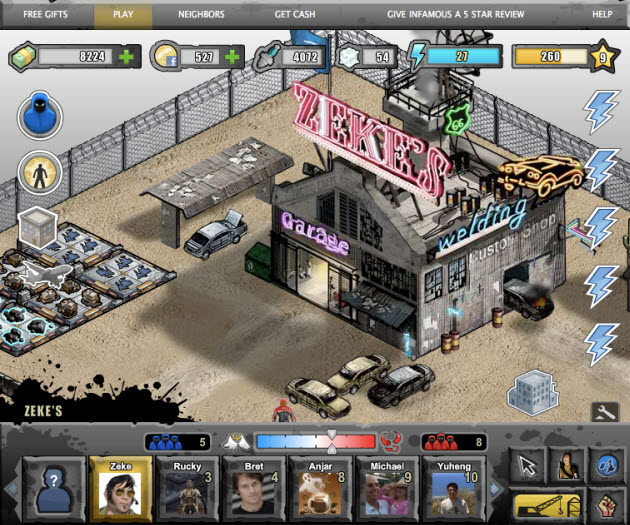 Infamous 2 is one of the big console game releases of the summer, and now Sony is trying to enhance that hit with its companion Facebook game. So far, the Facebook version is doing pretty well.

Infamous Anarchy, (built by MobScience and published by Sony), launched a couple of weeks ago. It has nearly 300,000 monthly active users and more than 1,500 reviews with a 4.9 star rating. That’s a pretty good showing for a Facebook branded game, and it may mean that Facebook users are embracing brands that they know on other platforms. You can expect more console game developers and other brands to do the same kind of companion gaming strategy on Facebook.

“This is our first AAA social game,” said Michael Witz, chief executive of MobScience. “We took the core ideas from the console game and turned them into a social game. Based on the user ratings, the players have reacted very positively.”

The Facebook game stands on its own. In the game, you play a character with the power to send electric shocks from your fingertips. You can clean up the thugs from the neighborhood and find materials in the world. You can take these materials to your friend Zeke’s crafting shop and make them into premium items that can help your character level up.

The game lets users of the Facebook version of the game unlock content on the PlayStation 3 game, including new “skins” for their avatar. This kind of tie-in is becoming more important and is something that pure Facebook companies such as Zynga can’t do. Ubisoft has also launched its own companion games for titles such as Assassin’s Creed on the console.

San Diego, Calif.-based MobScience built the game in flash on LAMP stack. MobScience has 12 employees and was founded in 2008. It has been publishing dozens of Facebook games since then, but this is the company’s first companion game. Other successful MobScience games include Coffee Bar, Magic Mall and Snowball Fight (the latter was played by more than 10 million people).

It took more than six months to do. The game has 50 levels and 16 different city districts. It has player-versus-player, crafting, farming, city-building, role-playing customization, and other elements. The game is free-to-play, where users play for free and can buy virtual goods with real money. Players can buy items, shortcuts, or energy.