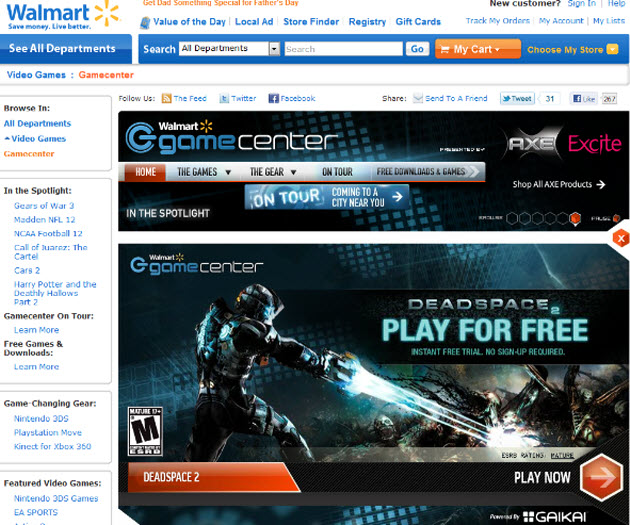 Game-streaming startup Gaikai has scored a major deal to stream high-quality video games for Walmart.com, the online division of the world’s biggest retailer, VentureBeat has learned. If the new way of selling games works out, it could mean a big step forward in digital game distribution.

The newly discovered Walmart.com Game Center web site shows that you can now play a game such as Electronic Arts’ Dead Space 2 video game simply by clicking on a link. You can try the game for free with a mouse click and then play it immediately, since Gaikai’s technology can stream the game directly to the player, wherever the player is — even if the user has a low-end PC. If the user likes the game, they can buy it on the spot. That’s what they call “friction free” in retailing, where shoppers can get instant gratification. 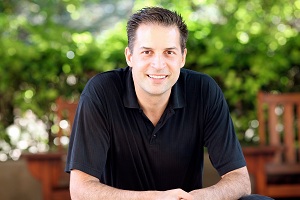 The new way of promoting and selling games makes it far more convenient for users to buy games. They don’t have to go to the local store, and Walmart.com will never be out of stock. Right now, there is a limited number of games available. But as publishers make more money with the new way of selling, they will provide more games. Providing older games in this manner can help boost sales of catalog games and head off sales of used games, which generate no revenue for publishers.

David Perry, chief executive of Gaikai in Aliso Viejo, Calif., confirmed that the Walmart.com deal existed after we learned about it. He said the deal shows that Gaikai’s technology for game streaming works. Perry said that Gaikai’s survey of 20,000 gamers showed that the No. 1 thing that gets them to buy a game is being able to try it out first.

But users don’t want to download a huge file just to play a short demo. Walmart wanted to be able to show gamers the experience of playing a game, rather than just showing them videos or screen shots. With Gaikai, users can play any game through a web browser, without downloading anything. If the user’s connection speed isn’t fast enough, Gaikai doesn’t make an offer to play the game. That way, users won’t have a bad experience.

“Over the next 12 months, when people see a video game on TV and want to try it out, they can be sure the fastest way will be on Walmart’s website,” Perry said.  “It’s an exciting time and you’ll see more sites around the world doing these stealth launches with us.”

Under the deal with retailers, Gaikai gets paid for the number of minutes a user plays the streamed game. Perry said that Gaikai is in talks with 20 game publishers to enable them to reach Gaikai’s web site distributors. It already has a deal with Electronic Arts to stream its games.

With streamed games, the actual game runs in Gaikai’s servers in the internet cloud, or web-connected data centers. Changes to the game are executed on the servers and then sent over broadband connections to a user’s computer. That way, it isn’t necessary to do any computing on the user’s machine, except displaying the images on the screen. The heavy-duty processing is done by the servers. That allows users to play games on web sites and use hardware that wouldn’t ordinarily be able to run game as a client-based title.

Gaikai began testing its game streaming with Electronic Arts this spring. The company raised an undisclosed round of funding from Limelight Networks and Intel Capital last year.