Hipmunk, a streamlined flight-search service, has finally launched an app for the iPad.

The iPad app’s search tool is similar to the website. Visitors type in which airports they are flying from and to and then select dates for when they want to travel. Hipmunk then browses all the airline sites available and sorts them in order of “Agony” — a hodgepodge of metrics that includes price, layovers, number of stops and flight duration.

Part of Hipmunk’s charm is its streamlined interface — the site only requires a user to enter a general area and a few dates. Like its flight search engine, the site pulls in information from flight and hotel booking engine Orbitz. Once users enter a search location and a date and find a flight they like, they can jump to Orbitz to book the flight.

Flights found through Hipmunk aren’t actually booked through the site — instead, Hipmunk directs its users to Orbitz and other flight aggregators to purchase the tickets. The same is true for the iPad application, except the tickets cannot be purchased within the app. The Hipmunk app sends users to a Safari browser where they can buy the ticket or gives them a code to use to purchase the ticket when they can access a computer.

The company also recently unveiled a new way to search for hotels through the site. That search engine uses a proprietary sorting mechanism that sorts hotels by “ecstasy” — which is a combination of hotel ratings, prices and other metrics. Just about every flight search engine has a hotel booking service — and that’s how they end up making a majority of their money.

Hipmunk has been a darling of the startup world for some time now. George Zachary, the Charles River Ventures partner who was an early investor in Twitter, said Hipmunk and his portfolio company Wanderfly were “the most innovative thing I’ve seen in travel” at the Launch Conference in San Francisco last week.

The site has raised $4.2 million in funding in a round led by Ignition Partners. The company is a Y-Combinator incubated startup co-founded by Adam Goldstein and Steve Huffman. The site launched a mobile version of its application at the Launch Conference. 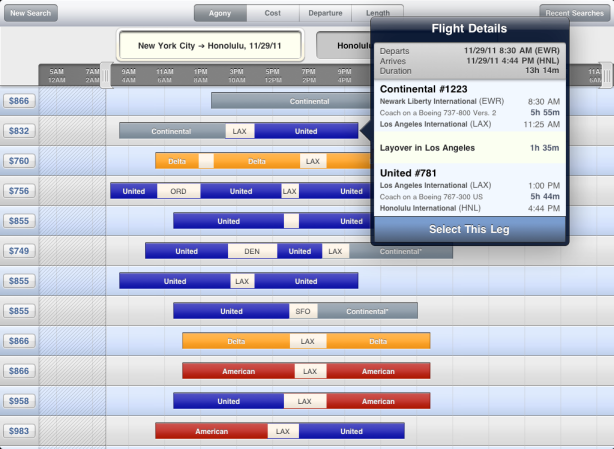