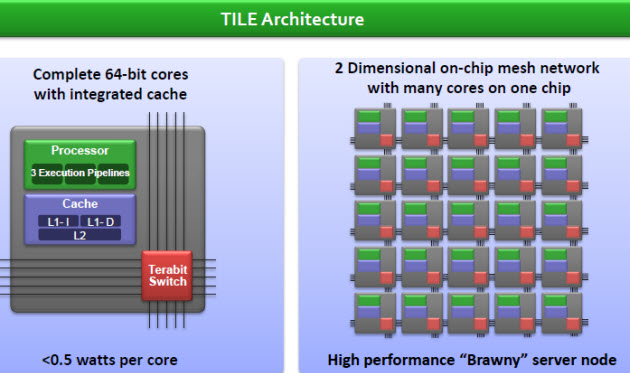 Tilera, a maker of chips with many brains, is announcing a third generation of chips today that it says will be ten times better in performance and power comparisons than the standard Intel chips that go into internet-connected data centers. 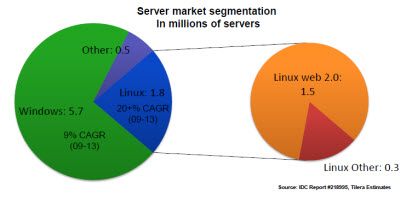 Tilera’s new generation of chips — with 36, 64, or 100 cores, or computing brains — combine both brawny computing performance with great power efficiency. The company says its new Tile-Gx 3000 series of chips is 10 times more efficient in performance per watt compared to Intel’s newest Sandy Bridge microprocessors. That could be critical to data center computers known as servers, which are under more and more stress as internet traffic keeps growing and power costs keep rising. Overall, Tilera says it can cut server costs by as much as 50 percent.

The San Jose, Calif.-based company is targeting a multibillion-dollar server chip market, particularly chips for Linux-based servers. That market is growing 20 percent a year. The customers for these kinds of servers include Google, Facebook, Zynga and Groupon.

The Tile-Gx 3000 chips, which aren’t arriving in the market until the third or fourth quarters, perform as much as 2.5 times faster than Sandy Bridge 8-core chips in raw performance. (Intel’s chips are likely to be faster by the time the Tilera chips are available). But the Tilera chips also use about 80 percent less power, with each core in a chip consuming less than half a watt.

The Tilera chips are a collection of computing cores that are connected by very fast interconnection pathways. The chips run at 1.5 gigahertz and compete directly against server chips from Intel and Advanced Micro Devices.

Tilera began talking to cloud computing companies such as Amazon a couple of years ago and it decided to address their worst pain points. They confirmed that power consumption was a huge problem, but the cloud companies also wanted beefy 64-bit processing. That’s because many cloud applications won’t even run in 32-bit mode, Bishara said.

The Tilera chips are targeted at servers that spend all day running web applications. They also targeted database applications and in-memory databases, which also require high memory throughput and storage. Tilera also targeted video transcoding, a common task for many web sites that have to change video from one form to another so users can see the video. And it focused on data mining applications such as Hadoop, which relies on high-disk throughput and data processing.

The progression shows that Tilera is making serious gains in performance. Tilera shipped its first chips in 2008.

Tilera hopes there will be a hole in the market that it can server. Intel’s x86 server chips are good at performance, but haven’t been as power efficient as ARM chips, which can be used in low-power devices such as cell phones where battery life is important. Tilera’s chips are brawny in terms of raw performance, but they also use a lot less power. Tilera discovered the 64-bit performance was a must, but it didn’t sacrifice too much power efficiency to get there. With luck, Tilera won’t get squeezed by Intel or the ARM vendors.

Back in January, Tilera raised $45 million in a fourth round of funding in order to finance an expansion and the development of its fourth-generation processor family. Investors in the new round included Artis Capital, West Summit, Cisco, and Samsung. Existing investors Walden International, Bessemer Venture Partners and Columbia Capital also participated. Other past investors are Broadcom, NTT Finance, VentureTech Alliance and Quanta Computer.

Tilera has come up with a unique programming model with tools that make the process of creating software to run on Tilera’s chips much easier, such as an ANSI C/C++ compiler, GNU tools and the open source Eclipse integrated development environment. The result, the company claims, is unbeatable performance and performance-per-watt of power used, Tahernia said. 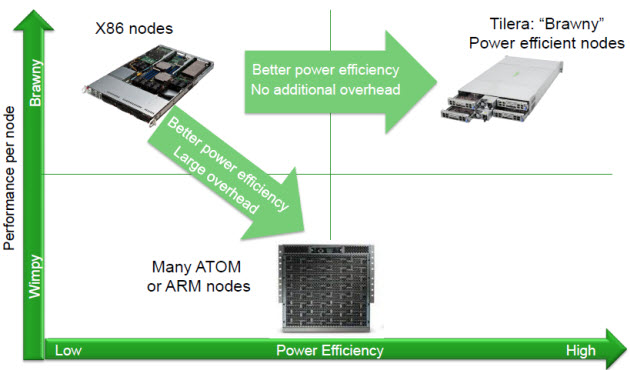