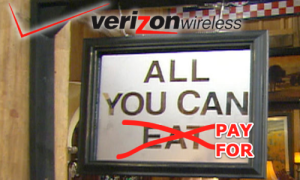 New Verizon customers will no longer have the option of choosing an unlimited data plan for their smart devices. The wireless carrier is rolling out new tiered data plans July 7, reports DroidLife.

Monthly plans for new customers start at $30 for 2GB, $50 for 5GB and a whopping $80 for 10GB, which doesn’t even include voice calling. Tethering costs an additional $20 for a measly 2GB extra added to the total data cap and additional $10 for every 1GB thereafter.

Data plans for tablets are also increasing to $30 for 2GB per month, which is $10 more than the current plan that offers half as much data.

Another big thing to note about the change in Verizon’s data pricing is that it doesn’t make any distinction between use of its 3G and 4G wireless networks. So, if you’re new to Verizon it makes sense to opt for a 4G device for a faster internet experience since you’re paying for it either way.

Since Verizon is the largest provider of wireless service in the country, many have long since speculated that it would join competitor AT&T in ending “all-you-can-eat” unlimited data plans after adding the iPhone to the list of devices available on the network.

By comparison, AT&T’s monthly data plans start at $15 for 200MB, $25 for 2GB and $45 for 4GB — much cheaper but not much of a deal for people unhappy with the lack of reliable service in larger areas like San Francisco.

Verizon is definitely more confident about its network’s ability to satisfy customers, which is probably why it didn’t bother offering a data plan below 2GB. Yet, it isn’t confident enough to let iPhone owners use the Facetime video chat application over its network.