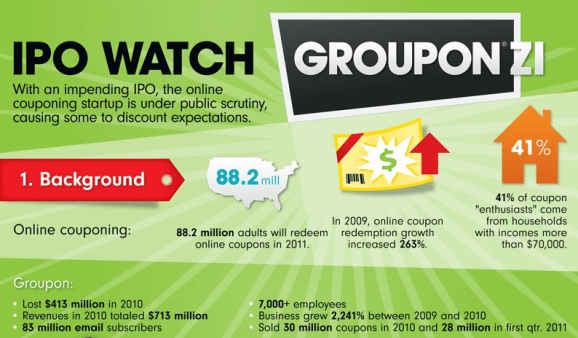 On the heels of filing its $750 million initial public offering, online coupon startup Groupon is under heavy scrutiny from critics.

Until recently, most people praised Groupon for its simplistic business model and its incredible growth, which some have called the fastest of any company to date.

Groupon lets users purchase steeply discounted deals from local merchants. Discounts range anywhere from 30 to 80 percent off the regular sale price on food, trips, drinks at a local bar, etc. Groupon takes half of the money from every deal sold, which is a pretty easy way to bring in a lot of money without having to get creative.

But the Chicago-headquartered company is still running at a loss despite the astonishing revenue growth, which went from $94,000 in 2008 to $713 million in 2010, according to the filing. Groupon has consistently lost money every quarter since launching except for one — the first quarter of 2010, when it brought in an $8 million profit. Comparatively, it lost $146.5 million in the first quarter of 2011.

Yet, the practice of offering group deals is a valuable practice that does bring in new customers, according to a recent study by ForeSee Results. The study shows that 31 percent of people who purchase a group deal from companies like Groupon and LivingSocial, are new customers.

Still, Groupon’s high operating costs require a steady infusion of money, which made original investors cash out when funding became available from new investors — making it a bit like a Ponzi Scheme.

Contrary to what you’d expect from a well-funded company on the verge of launching an IPO, Groupon hardly made an effort to denounce the widespread criticism in its blogged response.

The infographic embedded below offers a comprehensive look at the company’s history as well as an assessment of the ponzi scheme accusations made against it. It should be pretty useful for anyone curious about investing in Groupon.

Collaboration between VentureBeat and the Online MBA Site