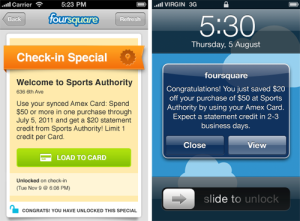 Just after announcing that it passed 10 million users, location-based check-in service Foursquare has said it is partnering with American Express to give members even better deals when they check in at merchants’ stores across the country.

This partnership and any similar future offerings will act as Foursquare’s chance to elevate itself over other location-based services like Facebook Places and Gowalla.

To the uninitiated, Foursquare is a mobile service where you use a smartphone application or mobile site to virtually “check in” to wherever you go. Whoever has the most check-ins at a spot becomes the “mayor,” and sometimes venues give discounts to the mayor or simply anyone who checks in.

As a Foursquare user and an AmEx card holder, this is exciting news to me. Getting deals from check-ins has been one of the biggest reasons I use the service, along with connecting with friends, getting recommendations on where to eat, and earning funky badges.

I realize there are many people out there that don’t understand the appeal, and I’ve even explained the service to friends and family who have scoffed at the idea of “checking in” any place you go. But I hope the AmEx partnership grows into bigger discount possibilities and the next time I go shopping with a friend, he or she can finally see how this service can not only keep you connected with friends but also save you money.

New York-based Foursquare was founded in 2009. The company is funded by Union Square Ventures, Andreessen Horowitz, and O’Reilly AlphaTech Ventures and has raised $21.35 million to date.