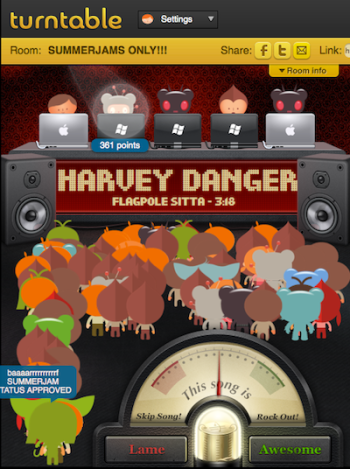 Music sharing social network Turntable.fm has gained over 140,000 users since launching to the public earlier this month, reports Betabeat.

Turntable.fm turns its users into DJs who can share musical tastes within specific virtual rooms classified by subject or  genre. Only five DJs can share music in a single room, but anyone can enter a room to listen. And unlike actual rooms featuring a performing DJ, people using Turntable.fm can rate extremely good or bad song choices by using either the “Lame” or “Awesome” buttons. Liking a song will earn the DJ who played it a point, while disliking the song contributes to the effort of skipping the track.

The only way to sign up for the service is through Facebook, which means the vast majority of those 140,000 users are unique.

It’s not clear why earning additional DJ points matters beyond unlocking new avatar choices. Perhaps the points will also serve the same purpose as community news sharing site Reddit’s accrual of “Karma points”. Yet, whether you boost your DJ points or not, Turntable.fm is undoubtedly one of the most entertaining uses of music for socialization in years.

The company had to throttle the number of new users to prevent constant down time due to a lack of engineers working on the site. Also, throttling new users was necessary for limiting the cost of running the service initially, according to Betabeat’s report.

Turntable.fm pays fees to both music publishers and non-profit performance rights organization Sound Exchange. Users can choose to upload songs from their personal collection or listen to something available in the service’s music library provided by Medianet.

The company was founded by Seth Goldstein and Billy Chasen, who previously created  Stickybits, and raised angel funding from Chris Sacca.