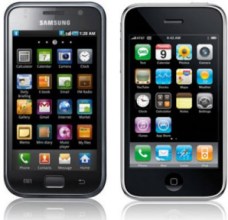 The legal spat between Apple and Samsung escalated Friday as the iPhone-maker filed yet another patent lawsuit against Samsung.

However, unlike Apple’s previous filings against Samsung in the U.S., today’s motion was filed in South Korea’s Central District Court.

Full details of the dispute have yet to be disclosed, but Apple spokesman Steve Park tells the AP that the suit is intended to “protect Apple’s intellectual property when companies steal [its] ideas.”

Though the announcement offers scant information, the mention of intellectual property theft all but ensures a widening front in the on-going patent war between the two companies.

Apple’s complaint went into fine detail – even Samsung’s packaging and chassis shapes were called out as patent infringements. Samsung fired back with its own claims of infringement, continuing the parry and joust routine that the two companies are still locked in today.

However, its still unclear whether events like today’s filing will affect Apple and Samsung’s other partnerships. Awkwardly enough, Samsung is the manufacturer of the A4 and A5 chips that power Apple’s iPhone and iPad.