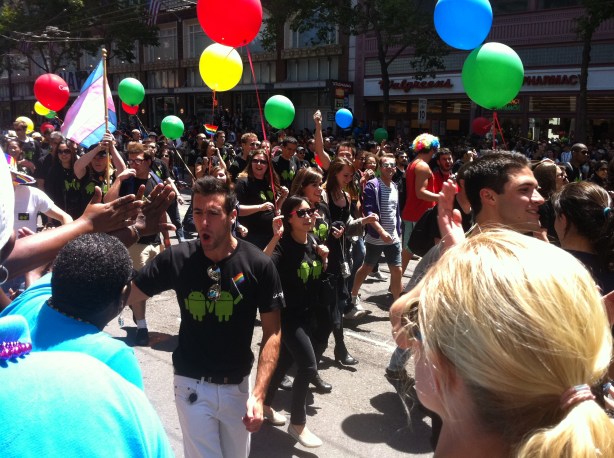 Googlers hit the street on Sunday to celebrate gay communities in San Francisco, Calif., and across the world in one of San Francisco’s largest celebrations, Pride Weekend.

And they weren’t the only representatives of Web 2.0 companies making their way down Market Street that sunny afternoon. Individuals from Facebook and Zynga also made appearances at the pride parade. Pride weekend is one of San Francisco’s largest celebrations. It’s a two-day event that celebrates the gay, lesbian, bisexual and transgender communities in San Francisco and across the world.

Google, Zynga and Facebook are known for being pretty avant-garde when it comes to cultural norms, and it looks like Pride isn’t an exception to that rule. Events like this are also a good way to get some extra buzz for the companies by showing they support causes like this.

The atmosphere was incredible on Market Street. There were more than 50,000 spectators at the parade — and at least that many at the celebration on Castro Street the night before — that hit downtown San Francisco to check out the show. Thousands of people were cheering, jumping, climbing trees and sign posts and laughing hysterically at some of the show’s antics. I couldn’t count the number of people breaking out Android phones and iPhones to record the festivities.

Google, Facebook and Zynga all had anywhere from a few dozen to hundreds of participants rushing down the street, cheering, shouting and throwing free swag into the crowd. Some were throwing handkerchiefs and fans. Googlers were throwing shirts that featured two Android icons holding hands, with one holding a Pride flag — the shirts shown in the photo above. (Unfortunately I wasn’t able to catch one.)

Here are a few photos from the Pride parade that featured some of Web 2.0’s hottest companies. 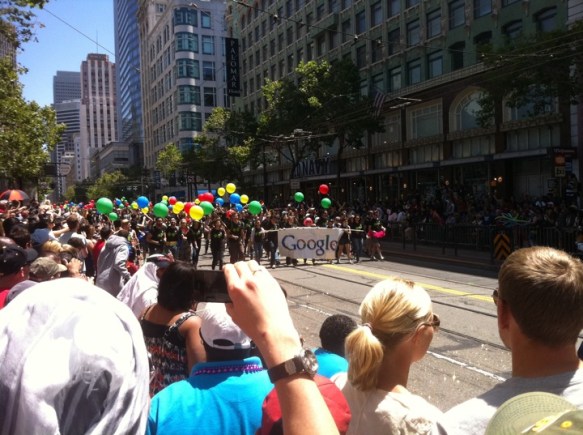 Googlers begin their march down Market Street as part of the celebration. There were at least a hundred people in the Google crowd. 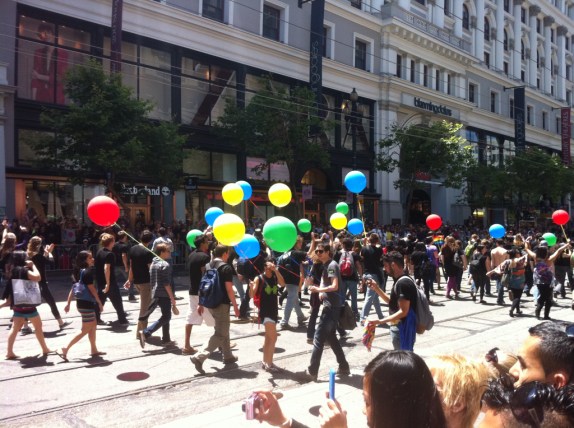 One of the people I went to the parade with commented that Google’s trademark colors on its logo — blue, green, yellow and red — all show up in some form on the official Pride flag. If you search for “San Francisco pride” in Google search, the search bar also sports a rainbow featuring the colors of the Pride flag. 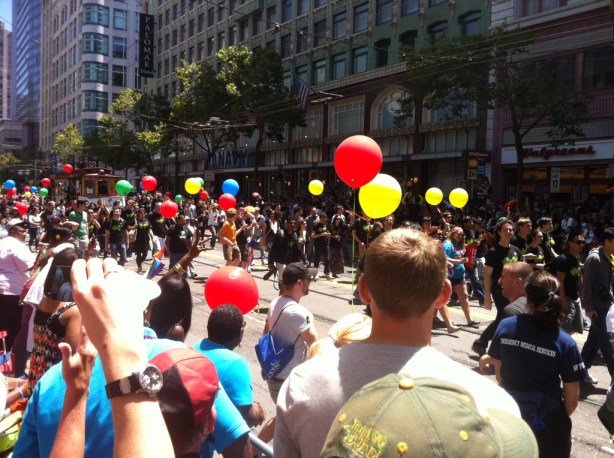 People were falling over each other while they were trying to lean over the rails set up along Market Street. Some wanted high fives from Googlers. Others wanted to get a better photo with their smartphones. 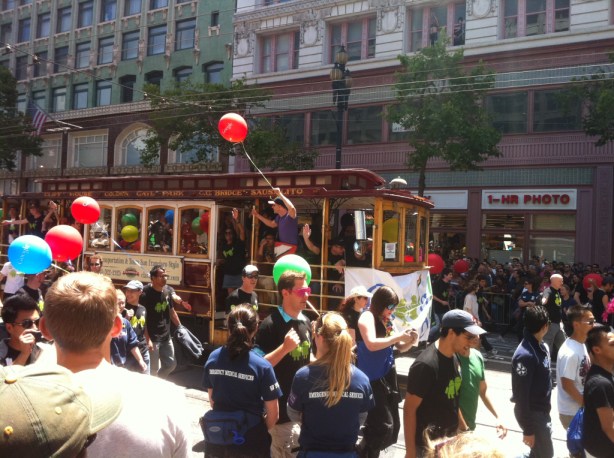 The Googlers also got their hands on one of San Francisco’s iconic cable cars. They weren’t the only group to ride a cable car in the parade — but they did seem to be the most excited about it. One Googler got so excited, he fell off the side of the car. 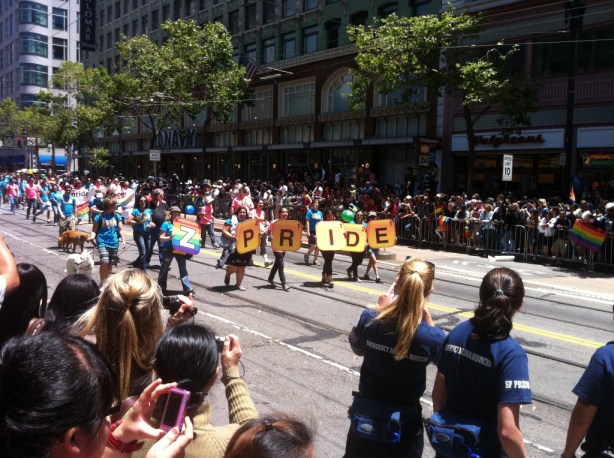 Zynga was the next group to make its way down Market Street. Naturally, there were a few dogs in the crowd (Zynga has a dog in its logo). The letters the Zynga folks are carrying are a reference to its popular game for mobile devices, the Scrabble-like Words with Friends. 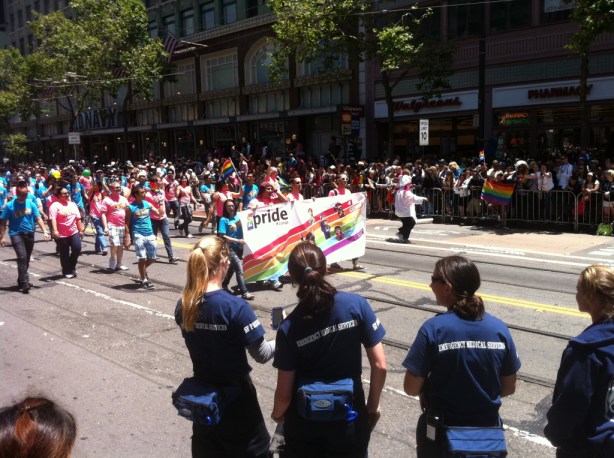 Zynga actually had the smallest crowd of the Web 2.0 companies. But they seemed to be just as excited as the rest of the people participating. 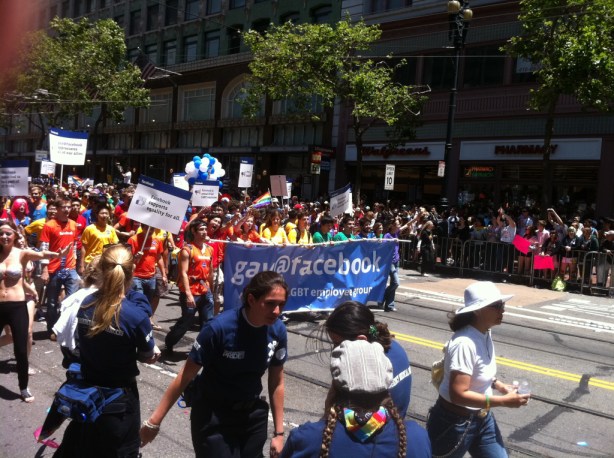 Men and women representing Facebook then made their way down Market Street. Most were carrying signs with some of Facebook’s iconic “like” and “relationship” symbols. 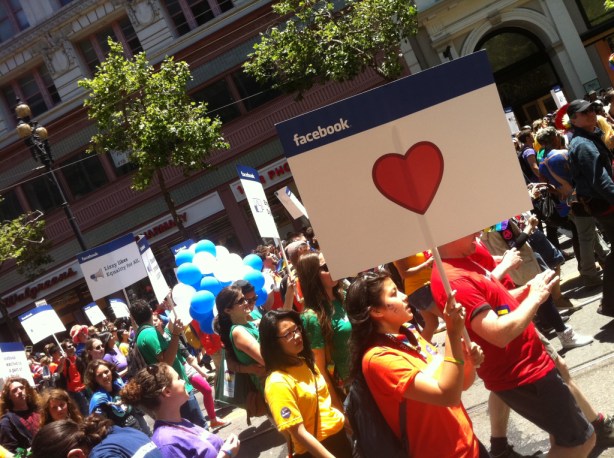 Facebook lets its users signal whether they are straight, bisexual or gay by indicating which sex they are interested in. The company has been doing that since its inception. 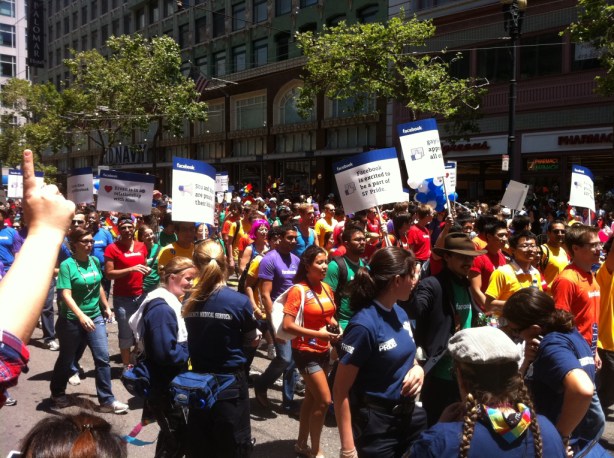 While Facebook boasts the largest social network in the world, it didn’t have the largest showing at the Pride parade on Sunday. But it did seem to bring out the youngest and most energetic crowd.