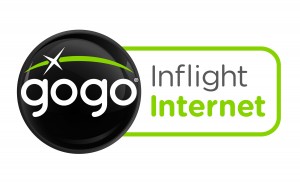 Boingo announced Monday that its customers could now login to in-flight hotspots serviced by Gogo, making it easier for Boingo users to access the web while traveling.

In-flight Wi-Fi is becoming a much more common amenity on U.S. flights and a tool that more business users demand on flights. Gogo said its network is available on more than 1,100 aircraft with its partners Air Canada, AirTran, Alaska Airlines, American Airlines, Delta, Frontier, United, U.S. Airways, and Virgin America. Meanwhile, Boingo maintains more than 325,000 hotspots around the world including many airports.

“The Boingo Roaming Network now extends six miles above the Earth thanks to the expansive fleet of Gogo equipped airplanes,” Luis Serrano, Boingo’s senior vice president of business and corporate development, said in a statement. “Gogo’s inflight network is a key addition to our roaming portfolio, especially since inflight access is one of the most requested service enhancements we receive.”

While the partnership does make it easier to access the web by only requiring one account rather than two, it is a superficial agreement that doesn’t help when it comes to price. Consumers cannot, for example, purchase a Boingo or Gogo unlimited monthly pass and use that pass on the other company’s network.

An unlimited pass on Boingo costs $9.95 a month while a monthly unlimited pass on Gogo runs $34.95. Gogo and Boingo’s single day offerings run between $5 and $13, but yet again, those passes cannot be used on the other company’s network.

It’s a good business deal for Boingo and Gogo, which will both likely add customers. But I’ll be more impressed when the two companies make a more expansive agreement that lets a customer buy one unlimited pass for both services.

Los Angeles, Calif.-based Boingo filed to go public in January to raise $75 million, and it currently sits on the NASDAQ exchange under the symbol “WIFI.” Its stock price has dropped significantly since its $13.50 per share IPO in May, and is now hovering around $9 a share.