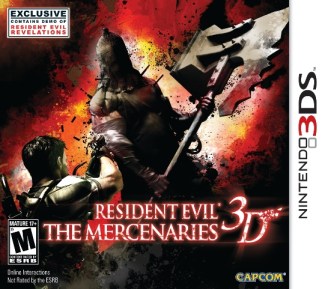 “Note: Saved data on this software cannot be reset.”

It’s rather inconspicuous, in tiny print on the back of the game cartridge. But that tiny “feature” present in Capcom’s latest game — Nintendo 3DS title Resident Evil: The Mercenaries 3D — is a huge slap in the face to gamers that like hunting down old and classic games.

The game automatically saves game data after players beat Resident Evil: The Mercenaries 3D. That means any extra goodies players get for beating the game — like some over-the-top powerful weapons, costumes or cheats like those common in Capcom games — will always be available on the cartridge. It’s a move designed to discourage gamers from going out and buying a used copy of the video game.

Developers have been trying to crack down on used game sales. Some game developers, BioWare for example, force gamers to purchase access to separate networks in order to download new content like guns and maps if they buy a used copy of a game. Other companies, like Half Life developer Valve, have switched to a digital-distribution model that lets gamers download games directly and makes it impossible to sell back the game when they finish playing it.

Used game sales are a huge business for several companies – the largest of which is video game retailer Gamestop. That company gets around 31 percent of its video game sales from buying back and re-selling used video games. Gamestop CEO J. Paul Raines and others can say digital distribution isn’t an insurmountable threat, but it’s still putting pressure on earnings as traditional console game sales slow down.

But what Capcom is likely not considering with this “feature” is what will happen a decade or so down the line, when the company stops printing the game and some gamer somewhere suddenly gets the urge to play it again.

I was feeling rather nostalgic recently and jumped onto Amazon to purchase a Dreamcast — Sega’s swan song video game console — and a whole host of games. Most of the games I purchased, like Sonic Adventure 2 and Soul Calibur, have been out of print for a while. So I had three options: pay an extreme price for a new copy of the game, steal it off the Internet or purchase a used copy of the game. I went with option three.

Now imagine, 10 or 20 years from now, the game is out of print. But on the off-chance Resident Evil: The Mercenaries 3D was a masterpiece, you might feel nostalgic and hit a site like Amazon to purchase a copy of the game and a Nintendo 3DS. You’re presented with those same three options again. Given the cost of new copies of classic games — Soul Calibur costs around $90 for a new copy and around $10 for a used copy, for example — you’d probably go for the smaller price tag.

The game finally arrives in the mail and you eagerly throw it into your old Nintendo 3DS. Then you realize your character is already carrying around a rocket launcher with infinite ammunition. Or you find out that you can’t access some early content because someone already cleared through it on the cartridge. You’ll never be able to experience an absolute fresh start unless you shell out all that money for a fresh copy of the game.

Capcom is also forgetting one other little detail — there are more than just a few gamers in the world, and a lot of them are friends with each other. I personally share games with a lot of my friends and I have saved a lot of money by trying out games before I go out to buy them. Sometimes I will play through a game I borrow from a friend — like Heavy Rain, for the PlayStation 3, for example — before I go out and buy the game on my own. But it’s critical that I get the “fresh start” experience, otherwise it ends up ruining the whole game.

One Nintendo DS game already did something similar to this, and the experience was terrible. The World Ends With You, a role-playing game developed by Square Enix, featured only one save game slot. While you could delete the game and start from scratch, the individual I borrowed it from didn’t want me to erase the game because he had already invested around 60 hours into it. It still let you start the game over from the beginning, but even after intentionally weakening your character it was easy enough to blast through the game because of all the advantages beating the game brought with it.

Digital distribution seems to work fine, because those games are always available as long as the company continues to deliver them. Steam, Valve’s digital distribution service, is particularly good about keeping old games up for sale. For example, gamers can go in and buy a copy of Deus Ex, which came out more than a decade ago. I’m playing through that game again for at least the 100th time ahead of the release of Deus Ex: Human Revolution, and it still feels great even starting from scratch.