After the iPad debuted last year, some people predicted e-readers would fade away, becoming at best niche products. But a report from the Pew Internet Project Monday shows a different trend: E-readers like Barnes & Noble’s Nook and Amazon’s Kindle are growing at a faster rate than tablet computers like the Apple iPad.

Tablets have been given more coverage in the press and the latest developments of the iPad are hungrily consumed by tech enthusiasts. But when it comes to actual adoption rates, e-readers—which are less-expensive than tablets—have grown at twice as fast.

The Pew survey asked adults in the U.S. which devices they owned. The number of respondents who said they owned e-readers doubled from 6 percent in November 2010 to 12 percent in May 2011. Tablet ownership moved from 5 percent to 8 percent in the same period. Only 3 percent of U.S. adults said they owned both a tablet and an e-reader, a figure suggesting many tablet owners would rather use a dedicated e-reading device than a tablet for reading books.

When compared to other earlier mainstream devices like cell phones, desktop computers, laptops, DVRs, and MP3 players, both tablets and e-readers are considerably early along the adoption curve. 83 percent of surveyed adults, for example, own cell phones while 44 percent own an MP3 player.

The full results of the ownership survey can be seen below: 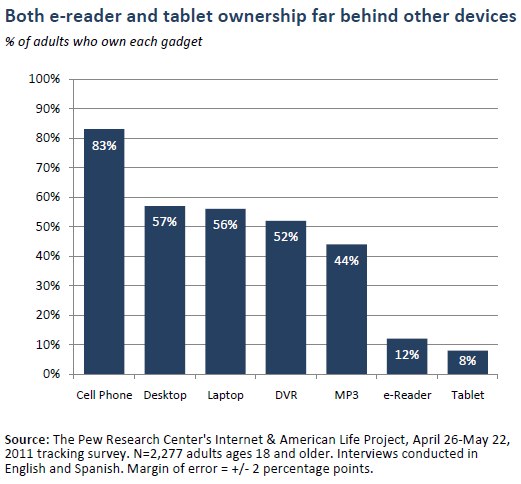