Victory! Or, in the wise words of every gamer in California, "Duh!" 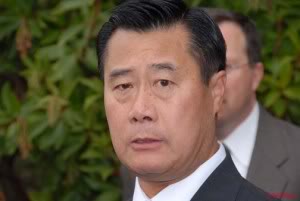 California State Senator Leland Yee laments today's Supreme Court decision retaining video games under First Amendment protection. Yee, who sponsored the original 2005 bill calling for the restriction of violent-game sales from minors, said the ruling "put the interests of corporate America before the interests of our children." Yee continued: "As a result of their decision, Wal-Mart and the video-game industry will continue to make billions of dollars at the expense of our kids' mental health and the safety of our community. It is simply wrong that the video-game industry can be allowed to put their profit margins over the rights of parents and the well-being of children." In the Supreme Court's majority opinion, Justice Antonin Scalia wrote that while a state certainly has the means for safeguarding children from harm, it also "does not include a free-floating power to restrict the ideas to which children may be exposed." The Court ruled 7-2 for striking down the California statute as unconstitutional.

Fable 3 Designer Peter Molyneux feels "ashamed" of the game's average review scores. "I still think it was a good game," Molyneux told Gamasutra. "I just don't think it was a great game that took us to 5 million units." Molyneux cited Fable 3's Metacritic score of 80 out of 100 as the primary deterrent of calling the game a success regardless of sales. "I'm pretty ashamed of that, to be honest, and I take that on my own shoulders, not the team's shoulders," he said. "I think that, when you have something like that which you can feel as a kick in the teeth, you have to pick yourself up and fight even harder." What Molyneux needs is a creative partner for objectively appraising each of his ideas and testing them for flaws. And possibly fight crime.

The Mass Effect games owe the majority of its heavy science-fiction style to 2001's animated film flop Final Fantasy: The Spirits Within. In the latest issue of Xbox World 360 Magazine (via CVG), Mass Effect 3 Art Director Derek Watts revealed that the series' iconic ships, computer interfaces, and environments take inspiration directly from the film. "We actually reference a lot from The Spirits Within," Watts said. "We used a lot of their graphical user interfaces [GUI], and the way they did their ship — that was kind of like in some of the early designs for the Normandy. Our attack helicopters are loosely based off that movie. There's some great stuff, especially their glowing GUI screens; we used those a lot. I keep a folder of that stuff, and I still actually tell the guys, 'Just go back and look at that. Change it like that!'" So that's where all the blue lens flare comes from. Mass Effect 3 has a planned March 6, 2012 release date for the Xbox 360, PS3, and PC.

Buying a pre-owned copy of Resident Evil: The Mercenaries 3D brings an unwelcome surprise: single-use save data. As part of an apparently harsh measure against profit-guzzling secondhand game sales, publisher Capcom included a clause within Mercenaries' manual stating, "Saved data on this software cannot be reset." As a result, poor Timmy Thrift will get stuck with someone's scores, imbalancing unlockable weapons, and other data when he raids his local shop for the latest bargain. The eloquent Jackie Chan sums up my take on this development rather nicely. Resident Evil: The Mercenaries 3D comes out on June 28 for the 3DS. [VentureBeat]