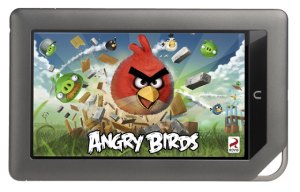 Barnes & Noble said Tuesday its Nook Color e-reader and tablet would be the first device to offer a real-world tie-in to the insanely popular Angry Birds game.

The original Angry Birds title hit 140 million downloads in April, and that number continues to climb as the game flies to every platform it can.

What’s different about the new Nook Color version is the inclusion of the “Magic Places” feature. The feature opens up extras when users play the game while connected to the Wi-Fi network at a Barnes & Noble store. Players at the store will get to use the “Mighty Eagle” bird—which basically demolishes everything on screen—on levels for free. Developer Rovio also said there will be other in-game rewards and unlockable content for users who come back several times.

Barnes & Noble will be scratching Rovio’s back by offering shelf space to Angry Birds merchandise, such as games, toys and merchandise. There will also be free Angry Birds stickers and temporary tattoos for children.

These kinds of deals will likely help the Nook Color gain traction over other e-readers and tablets. The device sells for $249 and acts as an e-reader and an Android tablet with many functions like e-mail, Internet access and a Nook app store.