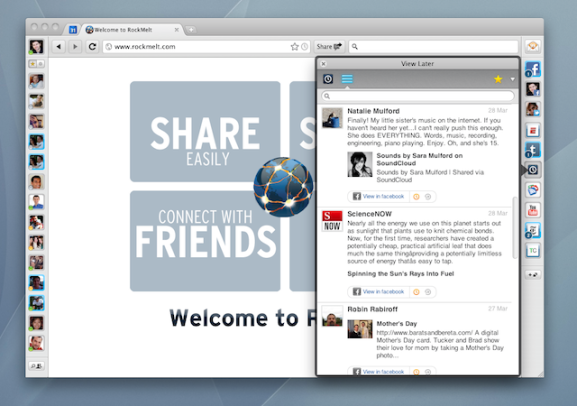 Social web browser RockMelt announced today that it has raised $30 million in its second round of funding led by Accel Partners, Khosla Ventures and existing investor Andreessen-Horowitz.

RockMelt’s web browser is closely integrated with Facebook and other social networking sites. Instead of having to constantly return to their favorite websites and social networks, RockMelt users can view their friends’ Facebook and Twitter updates, get notified about new content on their favorite websites, and start Facebook Chats with their friends from the actual browser program.

And on the top, there’s a box with an improved search experience. RockMelt opens a column of results instead of several tabs for individual searches. When you scroll down the column, the relevant web page will open in the background. All of the pages are pre-rendered, so you should be able to scroll seamlessly, without waiting for each one to load.

RockMelt is built on top of Chromium, the open source project behind Google’s Chrome browser. The browser has more than 1 million users, according to the company. It launched a private beta in November last year.

On average, RockMelt users spend more than six hours per day in the browser and share content every two to three days. The average user has three chats per day on RockMelt. The browser has a particularly young user base — with more than half of the browser’s users under the age of 24, according to the company.

RockMelt raised $9.9 million before closing its second round of funding from Andreessen-Horowitz and others. Jim Breyer of Accel Partners and Vinod Khosla of Khosla Ventures are joining RockMelt’s board of directors as part of the funding agreement. Super-angel Ron Conway also participated in the funding round.