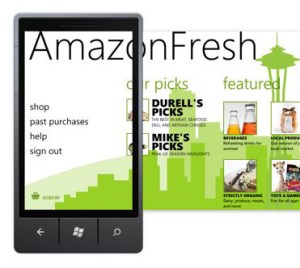 AmazonFresh, a grocery service from Amazon.com, has released its first mobile app. In a peculiar fashion, the first platform to get the app is Windows Phone 7, which has a much smaller market share than iPhone and Android.

But because AmazonFresh is only up and running in Seattle—where Microsoft resides and many Windows Phones are active—the launch of the mobile app is a smart, calculated move. Microsoft’s 40,000 employees are equipped with Windows Phones and may be interested in trying the service. iPhone owners, on the other hand, can use their mobile website to order from the service.

Microsoft must be happy to get a decent app for Windows Phone 7 before the likes of Apple and Google, even if it’s regional. The Windows Marketplace currently has more than 20,000 apps, compared to more than 300,000 in the Google Android Market and more than 500,000 in the Apple App Store.

Earlier today, it was also reported that Windows Phone 7 had finally landed the popular Angry Birds game. While that game has been released on almost every other mobile platform, its representation on WP7 helps give the OS more legitimacy.