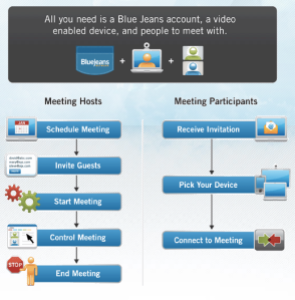 “What was once an elite boardroom technology has moved to the cloud,” said Krish Ramakrishnan, co-founder and CEO of Blue Jeans Network in a press release. Alagu Periyannan, another co-founder is the company’s Chief Technical Officer.

Here’s how it works: Blue Jeans users each get a private “meeting room” where they can schedule, host and manage meetings through a simple web interface. Participants join meetings by dialing a number or clicking on a link. Since this is cloud technology, there’s no software to download. Users without access to video can still participate in a Blue Jeans meeting over audio from their phone. See it in action here.

I tried it out, and the video quality was great. The latest version of Skype must be installed to connect to the Blue Jeans Network. I even managed to get the user name “Regina,” an indication that not too many people are using the service yet (or my name is just really rare). The user interface is very straightforward and my test dummies, er, friends had no problem joining in the conversation.

The Blue Jeans service has been in field trials since the beginning of 2011. Since mid-April, when the trials were opened to the public, the subscriber base has grown through word of mouth. Blue Jeans claims almost 4,000 subscribers with more than 500 companies represented in 100 countries. Current customers include Facebook, Fleming’s Prime Steakhouse and Wine Bar, Heidrick and Struggles, Internet2 and The Wharton School of the University of Pennsylvania.