Mothers have been telling children they are not the center of the universe ever since we knew what a universe was. Hitlantis respectfully disagrees. The Helsinki music discovery company is setting out to pull indie bands into the center of their universe. And now it’s raised $1.5 million in angel funding to help it do just that. 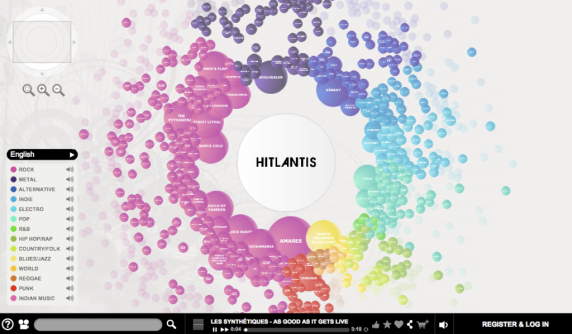 Hitlantis offers a unique user interface to facilitate indie music discovery. The app and web versions sport a solar-system-like look with the Hitlantis-core at the center. Artists orbit the core in their own bubbles and increase in size as content is shared, liked or bought.

Consider the bubble like an ego. The more attention you feed it, the bigger it gets and the closer it gravitates toward the center of the universe. Bands are even ranked on a “hotness scale”, which conjures memories of the dreaded “Hot or Not” voting of the early 2000s.

Investors in Hitlantis include a variety of Finnish angels and private investors like Nokia executives. Juha Tynkkyen, an angel investor and CEO of T&T Enterprises, said, “With billions of apps, countless numbers of songs and videos, among other forms of content aimlessly flooding the market every day, we need a compelling and engaging way to filter and discover relevant new content, and clearly the Hitlantis visual browsing platform is that solution, which is already proving itself with music.”

The free service saves on royalty fees by keeping with the indie theme. Bands can upload songs and post content as they do on Myspace. In fact, Hitlantis would have considered Myspace a direct competitor, had it not found itself on the auction block and ultimately bought by Specific Media. For 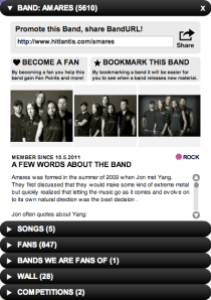 now, they feel their competitors are search engines and the iTunes storefront, which Hitlantis says is “cluttered”.

Unlike subscription-based services like Rdio and Spotify, Hitlantis wants to be seen as a music service driven by discovery. In a trip to Los Angeles this week, the company struck a deal with Island Def Jam to aid in their talent search. Universal Music is already engaging Hitlantis in their A&R department.

As for the future, Hitlantis sees opportunities to branch into other genres of content discovery. It could, for example, be an interesting outlet for apps and underdog developers.

Hitlantis has nearly one million users with a $4 million to $7 million first round of venture funding in the works for fall. The company plans on joining forces with other labels soon.