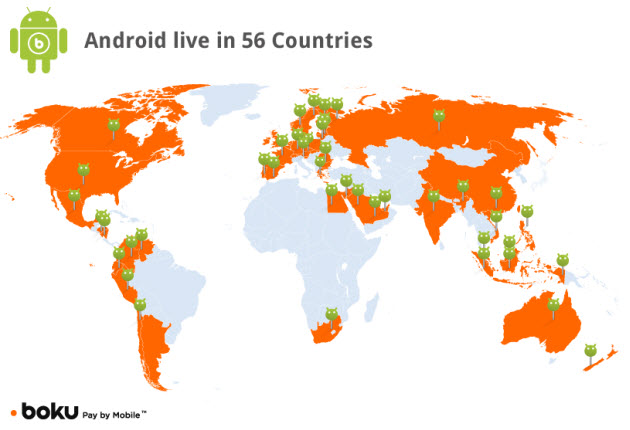 Boku is announcing today that it is enabling one-tap billing for Android devices in 56 countries. That allows users to pay for things such as virtual goods in social games by using their mobile phone numbers rather than a credit card. 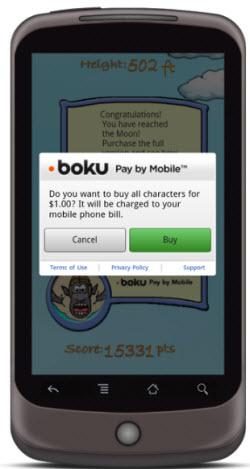 The charges go directly to a user’s monthly phone bill with a simple tap on the screen. Users don’t have to enter their long credit card numbers or personally identifiable information.

Boku previously announced its plans to move to Android, and now it is releasing the production version of its Android software development kit, which game and app developers can use to make their apps enabled for mobile number payments. Zong, a rival to Boku, has also been testing its one-click payment system on Android.

San Francisco-based Boku can now enable developers to aggressively expand their revenues as they launch free-to-play games, or those where users play for free and pay real money for virtual goods in the games. The free-to-play model is now possible on Android since Google enabled in-app purchases, or the ability to buy something without leaving an app.

The in-app purchase makes it convenient to buy something in a game. And Boku’s solution makes it easy to pay for that something. That makes mobile purchase much more convenient for a broader audience, which is good for game developers.

Boku supports 32 different languages and 40 different currencies. It works with Android 1.5 devices and up.

“When we developed the beta version, the reaction was tremendous and the value to developers was immediately clear,” said Erich Ringewald, chief technology officer at Boku. “The production version released today includes global country coverage, faster end-to-end transaction time, clear messaging to consumers and enhanced error handling.  All these new features help to increase conversion rates to merchants while providing a seamless and secure purchase experience.”