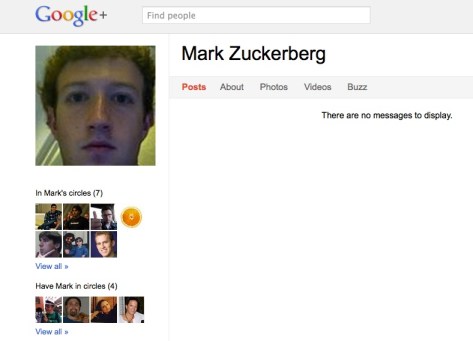 Google+ is still composed of an invite-only user base, but tech reporters have been invited into the fold. We’ve been playing around with Google+ all morning (na na na na NA!). One of us even chatted with Dana Brunetti, one of the producers of The Social Network, in a Google+ HangOut room.

Perhaps Mr. Brunetti added Facebook founder Mark Zuckerberg to his “People I did a Movie About” social Circle (Google+ allows you to group contacts in Circles).

Apparently Zuckerberg is on Google+, but as you can see from his profile picture, he doesn’t look thrilled to be there. Kashmir Hill at Forbes noted his profile a few minutes ago. No word on who invited him to join. Perhaps it was Google’s founders Sergey Brin or Larry Page… but they aren’t in his Circles yet. Bret Taylor, Facebook CTO, is in Zuckerberg’s Circles.

His “Introduction” on his Google+ profile reads “I make things.”

Throughout the night and this morning we’ve been noticing Google+ invites coming in waves. Read more about the “insane demand” to be invited to Google+.