A system of underground pipes will connect directly to 3 types of waste drop-off points for organic waste, recyclables and all other waste. A massive vacuum of 20-30 kilopascal of pressure is created to suck the waste into a local “substation” where organic waste is generally turned into biogas, recyclables are processed and other waste is incinerated to produce electricity or heat. In Envac installations, the waste may travel 8-9 kilometers at up to 50 km/hour. It takes 10 seconds to empty a waste point. The whole system is entirely automated and substations are unmanned. The same piping is used for all types of waste, with cleaning at intervals in between. 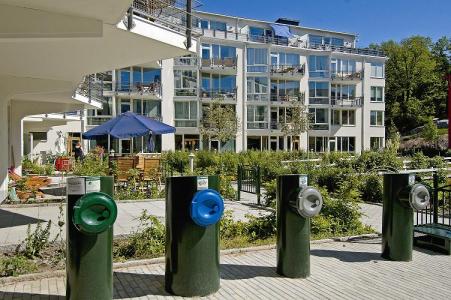 While Envac’s system may sound like something out of a Steampunk novel, it has been in use in parts of Sweden for many years. Envac’s marketing director Jonas Tornblom showed me around an early green development in Stockholm where the system has been in use since 1995.

One set of waste drop off points serves 30-50 families. In a clever piece of social engineering the drop off point is clearly visible from most of the apartments in the development, discouraging misuse and dumping of waste beside the bins (I wish this was the case in my area of Amsterdam). Early on, there were some problems with the purity of the biogas being produced from the organic waste because residents didn’t always deposit the correct types of waste. But after an education program the gas is now up to 95 percent purity.

Tornblom also gave a tour of the local waste “substation”, where the waste is collected and processed. Entirely unmanned, it must be the neatest waste dump I’ve ever seen; just a series of pipes and containers. The visiting journalists got quite giddy with excitement when a loud “whoosh” indicated the next round of waste was being sucked through the pipes. Waste management shouldn’t be this much fun.

The company just completed an installation in a park in central Stockholm that had a big problem with littering. The litter bins often overflowed, attracting birds, rats and cats who pulled the waste out. Envac’s new self emptying litter bins have sensors to detect when they are full.

A total of 100,000 people in Stockholm are served by Envac’s system. The biggest deployments elsewhere are in South Korea and China, where there are several installations in new developments handling waste from over 40,000 households. Envac sees the biggest future market potential in China and India, where the urbanization rate is extremely high, there is little space available to store the waste and high temperatures and humidity make storage problematic. 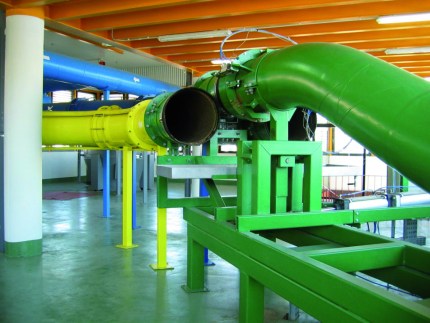 Another popular installation involves retrofitting of city centers. Envac already has deployments in Barcelona and Palma de Mallorca, and the company is currently retrofitting the Quartier International in central Montreal. In total, the company has close to 700 installations worldwide.

Envac does the complete installation itself from initial design to operation and maintenance. An Envac system is expensive to install because of the construction cost, but the running costs are very low in comparison to a conventional waste collection system. In the U.S., Envac has a competitor called Transvac, which specializes in vacuum waste systems for hospitals.

Envac is based in Stockholm and has 600 employees. The company was founded in 1952, but initially specialized in vacuum dust systems.