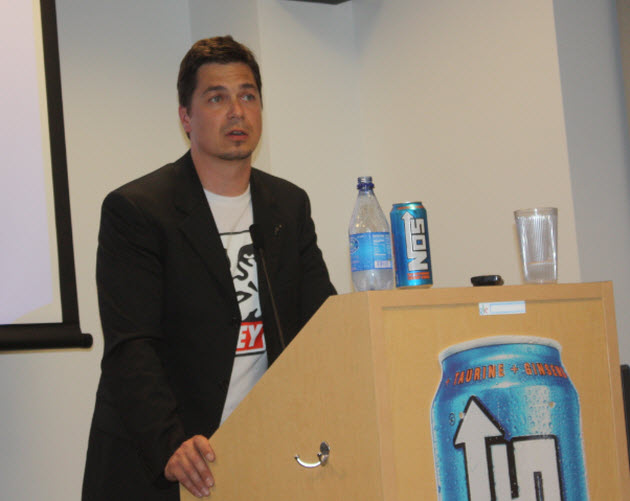 The Talking Friends series of cartoonish apps made by startup Outfit7 has generated more than 135 million downloads on the Apple App Store in less than a year. Outfit7 has cashed in big time on apps such as Talking Tom Cat, which launched nearly a year ago and has now become a cultural phenomenon.

Andrej Nabergoj, chief executive of Outfit7 in Palo Alto, Calif., recently talked about how Talking Friends became an iconic app through a series of happy accidents. He spoke at the San Francisco Game Developers Workshop on the Gods of Mobile this week, where we filmed this snippet of video below. Nabergoj will speak in a fireside chat at our upcoming GamesBeat 2011 conference on July 12-13 in San Francisco. He will be interviewed on stage by Bloomberg Businessweek writer Cliff Edwards. 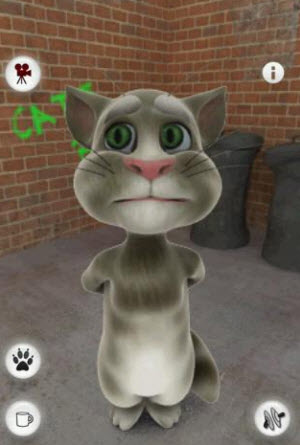 Nabergoj said he wasn’t the founder of the company but joined early as an advisor. The small team of Slovenian developers was creating an app that had talking characters who could reproduce spoken words with a funny accent. To find their first character, they went to an online site and purchased an animated cat for $60.

Now, every time a new version of the Talking Friends app launches, it takes off like wildfire. Talking Friends such as Talking Tom Cat are cute apps where users say something into the microphone of their iPhones and the cartoon character repeats it in a funny voice. Back in January, Outfit7 had 60 million downloads when I moderated a panel with Nabergoj in Munich. Now it has more than twice that number. The most recent launch hit 1 million downloads in a single day, and now the company has hired talent agency William Morris Entertainment to have films, TV shows, and books created around the characters. You can thank the former KGB (or whoever tracked down that guy) for that.

Check out the video of Nabergoj below.

We’ll be exploring the most disruptive game technologies and business models at our third annual GamesBeat 2011conference, on July 12-13 at the Palace Hotel in San Francisco. It will focus on the disruptive trends in the mobile games market. GamesBeat is co-located with our MobileBeat 2011conference this year. To register, click on this link. Sponsors can message us atsponsors@venturebeat.com.