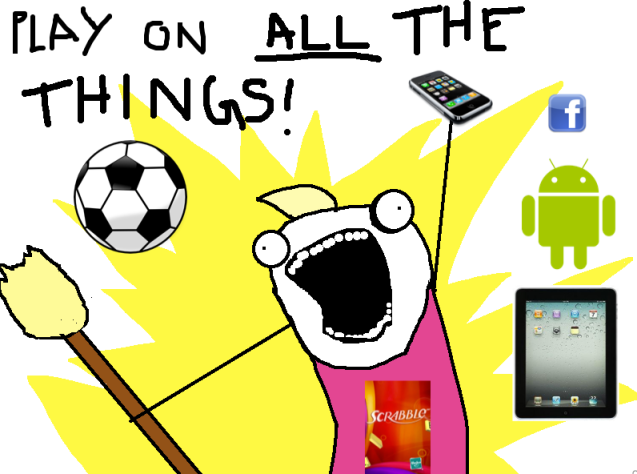 The next version of Electronic Arts’ mobile Scrabble game will let players compete against each other across multiple devices and platforms — at the same time.

Scrabble will be available on Android next week, while the game is currently available on the other three platforms.

At the same time, Electronic Arts’ next version of its hit soccer game, Fifa 2012, will let two players control a game playing on an iPad with two iPhones. Rather than having to carry around a home video game console, players can just carry an iPad with the game and play against each other using iPhones to control the game.

I got a chance to try out Fifa 2012, and the controller setup really does work like a charm. The iPad was connected to a television, which meant the graphics were blown up and looked a bit dated. But on the smaller screen, where the resolution is actually native, the game looked crisp and vibrant. There was virtually no delay between the moves I made on my iPhone and what was happening on the iPad.

You can check out a full demo of the Scrabble game in a video after the break.

[Looks like the original image should be credited to webcomic Hyperbole and a Half. It appeared on imageboard Canv.as, where I remixed it for the story.]

We’ll be exploring the most disruptive mobile trends at our fourth annual MobileBeat 2011 conference, on July 12-13 at the Palace Hotel in San Francisco. It will focus on the rise of 4G and how it delivers the promise of true mobile computing. MobileBeat is co-located with our GamesBeat 2011 conference this year. To register, click on this link.