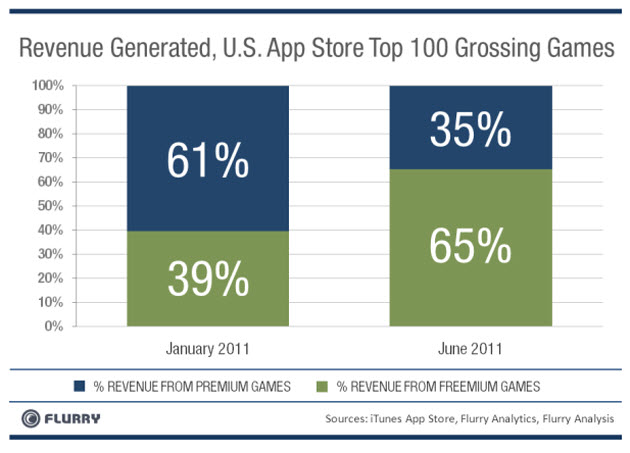 Jeferson Valadares, general manager for games at Flurry, said the question of whether to make a game free-to-play generates a lot of anxiety among developers, who have always charged upfront fees in the past. Flurry tracks more than 90,000 apps with its analytics service and measures the amount of revenue generated per ranked position in the App Store.

“The traction of the freemium business model is undeniable and growing fast,” Valadares (a speaker at out upcoming GamesBeat 2011 conference next week) wrote in a post. “In fact, with games often occupying more than 75 percent of all top 100 grossing apps in the app store, it’s the single most dominating business model in the mobile apps today.”

Valadares added, “In the old paid world of video games, success was measured by multiplying the number of units sold by the unit price, the traditional retail model. In the new world of digital games distribution, it’s all about how many players you can keep engaged with your free game, followed by how many compelling spending opportunities you can provide them.”

The power of free-to-play is that more people will likely try out a new game, and revenue grows since those larger numbers of players can spend different amounts based on how engaged they are. Some players will spend tens of thousands of dollars in a game that they really like.

Flurry data shows that the number of people who spend money in a free game ranges from 0.5 percent to 6 percent depending on the quality of the game and its core mechanics. Although this means that more than 90 percent of players will not spend a single penny, it also means that players who love a game spend much more than the 99 cents that is the usual price for a paid download.