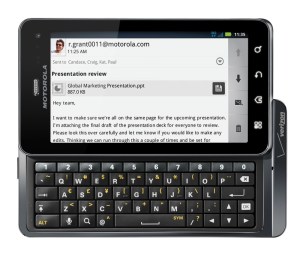 Verizon on Thursday announced the Motorola Droid 3, which considerably improves upon the Droid 2’s hardware specs with a dual-core processor and a better display.

The line of Android phones on Verizon has been ravaged by the emergence of the iPhone 4, so it’s important for newer, more powerful phones to show up to keep the fight alive against Apple’s iOS machine.

The only thing noticeably missing in the Droid 3 is faster 4G LTE data capability. Motorola delayed its previous LTE 4G entry, the Droid Bionic, earlier this year, which makes it one of the few major manufacturers on Verizon without a 4G phone.

The Motorola Droid 3 looks a lot like the original Droid and Droid 2, and it maintains its slider form factor with a full QWERTY keyboard. The phone now also packs in a dual-core 1GHz processor, Android 2.3, 16 gigabytes of onboard memory, an 8-megapixel camera, and a front-facing camera. On top of this, the device’s 4-inch qHD display puts out 960-x-540-pixel resolution that will make watching videos or browsing the web a blast.

The Droid 3 is also equipped with a global chipset that allows it to be used in more than 200 counties, which could be great for frequent business travelers. There are also security options that could be useful for businesses and average consumers alike, such as remote wipe, SD card encryption, and password support.

Verizon is now taking Droid 3 pre-orders and will launch to the device for $199.99 on July 14. New customers will have to abide by new tiered data plan rules, but older customers can keep their unlimited data if they choose.