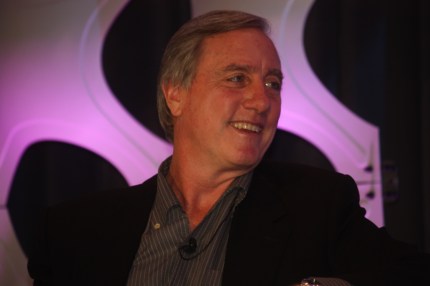 THQ is a well-established company that has dozens of years of experience making video games, but it now has a market cap smaller than the valuation of social games site Zynga. That’s caused the company to rethink its strategy — to be more like a startup — said THQ chief executive Brian Farrell.

Farrell is the longtime chief executive of THQ, the publicly traded video game publisher based in Calabasas, Calif. His company is in the midst of a turnaround effort as it focuses on better, higher-quality games like many other large rivals in the video game business. And at times it hasn’t communicated that it is competing effectively in the mobile arena, Farrell said. He made the comments on stage today at VentureBeat’s GamesBeat 2011 conference in San Francisco.

For mobile devices, THQ is working on better bite-size games — like those on the iPhone and Android devices — rather than massive titles with awesome graphics on hand-held consoles like Sony’s PlayStation Vita or the Nintendo 3DS. The market is demanding more titles that are around $1 or free-to-play rather than expensive handheld titles in the mobile arena, Farrell said.

“The dedicated handheld market is going to find an audience, but it isn’t going to be as broad because of the competition from other operating systems,” he said. “What the market is telling us, is consumers want a very quickly consumable mobile experience; it doesn’t necessarily have to be deep.”

THQ is making big bets on titles such as Saints Row the Third, Metro Last Light, Margaritaville, Space Marine, and others. Farrell is a good-humored executive who is doubling down on big titles and is expanding into new digital games. We met up with him for an interview at the E3 trade show in Los Angeles last week, where the company showed off a bunch of major titles.

Farrell said the next generation of video game consoles probably won’t focus on being powerful and having great graphics. Instead, the focus will be on building an ecosystem that is more accessible and lets players interact with games in new ways — like through the use of motion controls like Microsoft’s Xbox 360 Kinect controller, or different types of controllers.