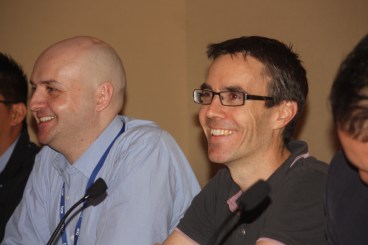 Investors haven’t been very good at figuring out which gaming companies will be successful, said Google Ventures partner Joe Kraus.

That’s not limited to social gaming companies like Zynga or Kabam but also hardcore game makers like Trion Worlds, he said.

“Half the deals for fund makers were under-subscribed in A and B rounds,” said Kraus (pictured right) in a panel at GamesBeat 2011 Tuesday. “The data suggests that we’re actually really bad at picking even as professional pickers.”

Trion Worlds, maker of the online game and World of Warcraft competitor Rift, raised $70 million just before the recession hit full swing. It involved a little bit of luck, said company CEO Lars Buttler, in the same panel discussion. None of the well-known firms like Accel Partners and Kleiner Perkins Caufield & Byers invested in Trion at the time — instead, that round was led by Act II Capital.

Then Kleiner Perkins’ Bing Gordon backed mobile gaming firm Ngmoco, which was bought by DeNA for $403 million. Kleiner Perkins Caufield & Byers also invested in Zynga. Accel would also later go on to invest in Angry Birds maker Rovio. Just about everyone else missed the boat with social games and gaming, Kraus said, because there wasn’t any indication that the companies would be successful and they required a lot of capital.

One of Zynga’s early funding rounds was only $29 million, when the company was bringing in around $35 million in revenue. The company has since exploded, growing to more than $500 million in revenue each year. It recently filed to go public in order to raise up to $1 billion, valuing the company somewhere between $10 billion and $20 billion.

“At the time, Zynga’s round of $29 million seemed like a lot of money,” said social game company Kabam CEO Kevin Chou. “It was actually the right amount of money.”

Nowadays, social gaming companies raise a lot more money than that. Angry birds maker Rovio recently raised $42 million, while hardcore social game maker Kabam recently raised $85 million. Kabam entered the social gaming space in 2009 because it raised enough money that it was able change directions. It was originally an enterprise social network when the company was founded in 2006, but shifted to games later.

Some of the most successful gaming companies have grown because they have better access to analytics and information about their players. Zynga, for example, is able to figure out a lot of information about their players — such as what games they are playing, and for how long, and even what goods they are buying, Chou aid. This enables Zynga to optimize the game for its players and make it more likely that the players will buy virtual goods or play longer.

“We’ve moved from the gaming space from the age of artists to the age of mathematicians,” said Menlo Ventures managing director Shervin Pishevar. “I don’t think Zynga is a gaming company, it’s a business intelligence company.”