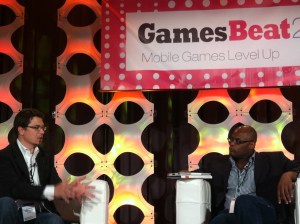 Outfit7 announced at GamesBeat today that they have hit 150M downloads between their iOS and Android offerings. Additionally, they have no interest in receiving funding.

“We get a round of funding every month,” said Outfit7 chief officer Andrej Nabergoj. He means that the profits grossed from in-app purchases are more than enough to sustain Outfit7’s growth.

Goes to show, even with massive, fast-paced growth, you can bootstrap for a long time.

The growth is real. Aside from their downloads total, Outfit7 recently partnered with William Morris Entertainment’s Ari Emanuel, who inspired the HBO Entourage character Ari Gold, to expand their brand into traditional media. Also signed is licensing agency, Beanstalk.

Most interesting is Outfit7’s view of themselves as a gaming company. “We didn’t want to make a game in the first place. We’re not gamers. It’s not our DNA,” said Nabergoj. “We wanted to do something that was really connecting with people on an emotional basis.”

People seem to be connecting like they hope. A couple in Denmark was married by Talking Tom. The app helps a family understand their daughter who has cerebral pualsy utilizing Tom’s high pitched and faster voice. Outift7 is even seeing half a million personal messages being sent using a Talking Friend video as the message content.

“Our characters speak all languages in the world,” explained Nabergoj. It is easy for anyone to connect. In fact, Outfit7’s biggest market is Asia, with the US following as their biggest single market.

Nabergoj hinted that going forward, Outfit7 will focus on Talking Tom, Talking Ben and a third character. Outift7 remains hush hush on the new friend, but says he will be on the Outfit7 mainstage.