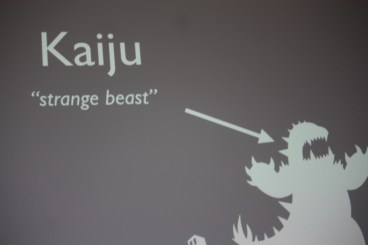 This company makes games that bring comically outlandish Japanese-style monsters back to video games. It will launch Kaijuland later this year, a social game that lets players create a ridiculous monster and wreck a city. The game will be available for mobile devices, the web and home consoles. Kaiju Empire showed that it had a road map for multiple games and licensed products. 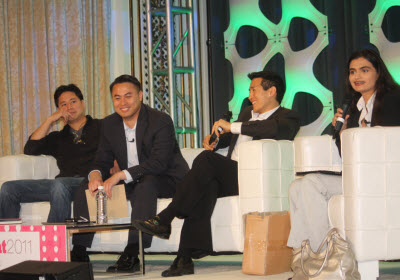 This year’s GamesBeat conference, where the competition took place, was focused on the meteoric rise of mobile games and looked at best cases for money-making and growing user bases in mobile games. It featured our third annual edition of the “Who’s Got Game?” contest that highlights the best game startup. In an effort to ferret out the best startups in the game industry, we chose eight finalists who presented live, on stage in front of a big crowd.

The company was both our judges’ top pick and the People’s Choice winner for the most popular gaming app at the show this year. The judges (from right to left) included Sana Choudary (moderator) co-founder of YetiZen; Tim Chang, partner at Norwest Venture Partners; Michael Chang, director of corporate development at Electronic Arts; and Terence Fung, head of corporate development at Zynga. The judges sifted through 39 applicants and saw 4-minute presentations from eight finalists on stage.

The prizes were an iPad 2 from TriNet and enrollment in the August round of YetiZen’s game accelerator class. That is similar to incubators like Y Combinator, which offer companies advice and a little bit of funding to get them rolling. But YetiZen refers to itself as a game startup accelerator, as it offers advice and training but doesn’t fund its own startups.

The GamesBeat startup competition was sponsored by TriNet.