In June, video game sales fell once again as the U.S. retail game industry continues to suffer from a low rate of new game releases, according to market researcher NPD Group.

The figures also show there is wide variation month-to-month in the game business. In May, sales were down 20 percent.  For April, sales were up 20 percent, thanks to the release of more hot game titles. In March, sales were down 4 percent. While it may seem like the game industry is in a funk, these sales numbers reflect only retail sales. Other digital sales — including used games, rentals, online games, mobile games and social games — show constant growth.

“It’s not a great month to report in terms of new physical content sales,” said Anita Frazier, an analyst for NPD. While RockStar’s L.A. Noire (pictured) is a fantastic game, it isn’t comparing well to Red Dead Redemption, the big seller from a year ago. A number of other titles released last year — FIFA world cup soccer, Tiger Woods golf, and Toy Story 3 — also help explain why this June couldn’t beat year ago numbers.

If you throw in the sales of PC, console and portable games, the total is $508.9 million, down 10 percent from $566.8 million a year ago. In other words, any way you slice it, gamers didn’t buy much stuff in June.

Last year saw the release of RockStar Games’ Red Dead Redemption, while this year RockStar (which is owned by Take-Two Interactive) released the highly acclaimed LA Noire detective game in May. LA Noire took the No. 1 spot in sales again for June. In second place was Duke Nukem Forever, the over-the-top comic shooting game from Take-Two Interactive. The game was widely panned by critics, but it is selling well.

Other top sellers were No. 3-ranked Infamous 2 on the PlayStation 3 from Sony; Lego Pirates of the Caribbean from Disney; Legend of Zelda: Ocarina of Time from Nintendo; Call of Duty Black Ops from Activision Blizzard; NBA 2K11 from Take-Two Interactive; Mortal Kombat 2011 from Warner Bros. Interactive; Cars 2 from Disney; and Just Dance 2 from Ubisoft.

Microsoft said it has sold more Xbox 360 consoles than anyone else for 12 of the last 13 months in the U.S. Microsoft said it sold 507,000 consoles in June, or twice as many as other current rivals, giving it a 48 percent overall share for the month. The Xbox 360 was the only console to show year-over-year growth in the month of June. Overall spending on the Xbox 360 in June was $350 million.

Frazier said that halfway through the year, the only platforms enjoying growth compared to last year are the Xbox 360 and the PS 3. 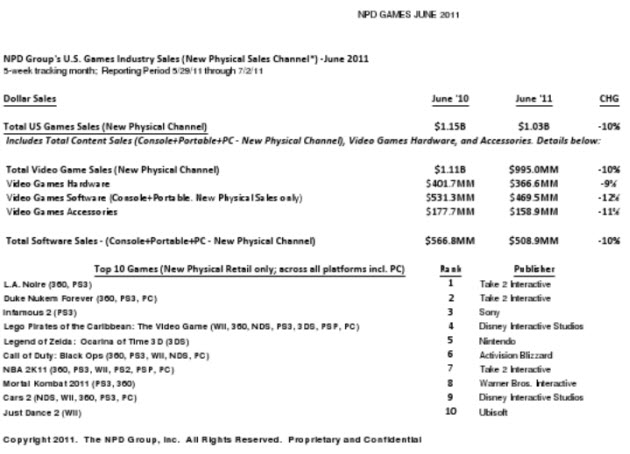