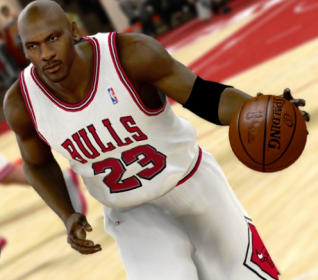 Basketball game NBA 2k11 doesn’t start off with a title menu. It throws you straight into the classic 1991 championship game between the Chicago Bulls and Los Angeles Lakers. Michael Jordan, arguably the greatest basketball player of all time and the superstar shooting guard of the ’91 Bulls, turns to you and asks if you are ready.

He rushes out onto the court. It doesn’t even feel like a video game. It feels like I’m sitting with my friends watching this game while it’s on live television. Somewhere out there, Jordan is laying a beat down on Magic Johnson, the Lakers’ point guard and top player. I don’t, at any point, feel like I’m physically playing basketball.

“The point of our games is not re-enacting throwing a football, but the spirit of the sport and letting gamers fulfill their sports dreams,” said Andrew Wilson, Electronic Arts’ sports game guru. “These are real players, they are real events and there is real angst — we want to re-enact reality.”

What’s more, sports games have an unrecognized role in driving forward innovation for the entire video game industry. That’s why you should take them seriously, even if you’re a sports-hating nerd who would rather pick up a BFG than a basketball.

I pissed off a few people for making a snarky comment about people complaining about the release of yet another Madden and NCAA Football game from Electronic Arts at the company’s summer games showcase last week. It’s perfectly understandable that someone would complain about the release of yet another sequel that — at face value — doesn’t seem to include new content or innovate at all. To most people’s eyes, the games seem like a roster update and a slightly better graphics and physics engine. But those people are missing the point of sports games.

Take NBA 2K11, for example. The game re-enacts some of basketball’s finest moments, such as Jordan’s famous shrug after he drilled his sixth three-point shot in the first half of game one against the Portland Trailblazers in the 1992 NBA finals. The same is true for other sports games. As a University of North Carolina graduate, I’m a Bulls fan by default. But I was way too young to appreciate that series back in ’92, when Jordan was at his peak. I was 5 years old at the time. This video game helps me relive an experience I missed the first time around.

“When I look at the various people out there criticizing the franchise, they’re not sports fans, and that’s okay because there are a lot of people who are,” Wilson said. “If you ever ask a sports fan, there’s a reason the sports category is one of the top categories in games — it makes up around 20 percent of the game industry.”

Most of the heckling I took from that comment came from gamers saying that they should simply go out and actually play football. But these sports video games aren’t designed to replace that experience. The act of playing a sport is something that binds us together as human beings. Games like soccer and tennis transcend nations, ideologies and religion — they are games we all feel a deep connection to, and physically playing that sport will never be replaced.

And, after all, you wouldn’t want to feel like you are defending Johnson when he drives the lane for a lay-up a hundred times in a game.

Sports games are a main source of revenue for Electronic Arts, so a lot of the innovation in terms of graphics and realistic physics happens in that department and trickles down to other games, said David Tinson, director of relations for EA Sports. Electronic Arts, for example, uses the collision engines originally built for Madden in games like Battlefield 3, Wilson said. Each year, those teams build and re-build physics and animation engines for their in-game characters, and then other games reap the rewards of those engines. 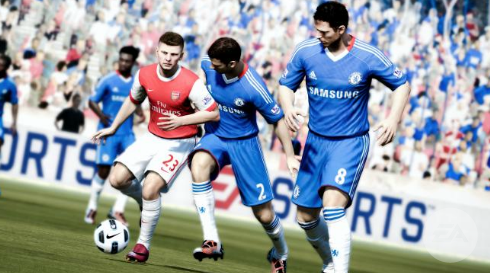 The same goes for artificial intelligence. Shooters are becoming more realistic so it becomes more important that non-playable characters start making decisions like normal human beings. That started with games like Fifa, where the company had to design artificial intelligence that would make 22 players on a pitch behave like real human beings and make realistic decisions, Tinson said.

Those teams also pioneered the “once-a-year” cycle that many companies like Activision-Blizzard now employ in their largest franchises, Tinson said. The teams spend longer than a year working on the game, and they rotate as to which year to release games. For example, Call of Duty: Black Ops and Modern Warfare 3 are both Call of Duty games released one year apart, but they both had development cycles longer than one year. Activision-Blizzard is able to do this because they have multiple Call of Duty teams.

Again, these video games aren’t supposed to exactly replicate the act of watching a real sports game or going out and playing a real sport. I’ve added videos below of one of the greatest moments in basketball history, including both the real thing and a representation of it in a video game. It’s not the same thing, but the video game does a great job of capturing the emotion and feeling of that game. For video gamers, that makes it a window into an important piece of sports history.

So, to the folks I pissed off a little while ago: I’m not saying you have to start liking sports games. But realize what they contribute to the industry. It isn’t simply Football Roster Update 2012 or Next Sports Game 2012 — they are new games, just like every other genre. And they bring something new to the table, too.